Liberty University police investigated for use of force during arrest of black man: ‘Get your knee off his neck’ 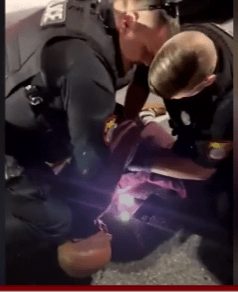 Miller’s son filmed the encounter as his dad pushed back on the officers’ request for ID, and eventually resisted arrest. “Dad, just stop! Dad! Dad! Stop! Just stop [resisting],” he shouted as the officers held Miller to the ground.

The Liberty University police approached a truck parked by an empty car in the Candler Station parking lot several hours after the parking lot had been closed. The officer addressed Miller about violating the trespassing code of Virginia. “There is no crime. That’s the number one,” responded Miller.

Miller refused to hand an ID to the officers. “Sir, we don’t even know if this is your car,” one of them explained. “There’s no need for you to,” Miller countered.

He continued to resist the officers’ requests for ID several more times.

Once Miller was being physically detained outside the car, one of the officers appears to place his knee on Miller’s upper back as he fought the officers’ restraint. “Dad, just stop,” his son begged.

“Hey can you get your knee off his neck before he’s the next George Floyd please?” the son is heard saying in the video. “Sir, my knee is not on his neck,” the officer replied.

After his arrest, Miller was charged with trespassing, failure to show ID, and fleeing. An internal investigation into the officers’ conduct has been launched by the university in response to the incident.

Poll data also showed that an overwhelming majority of Americans, 76%, believe that without regard to race, all young people should be taught to comply with police rather than resist or flee arrest.

Liberty University has not released a public statement on the incident.

RELATED: George Floyd mural reduced to rubble after being struck by lightning