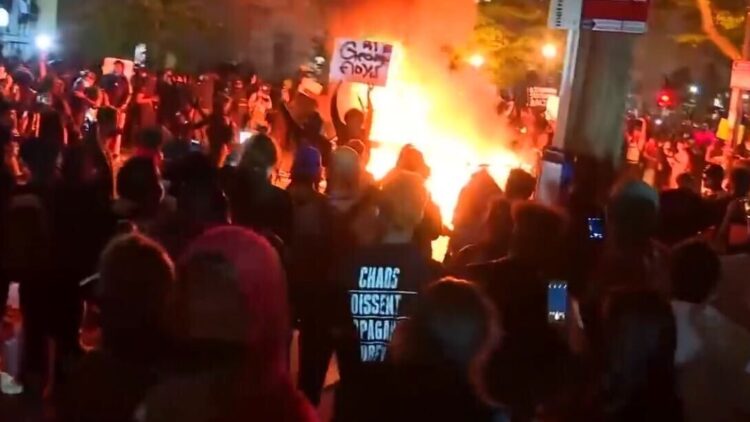 A majority of voters, 66%, said they are in favor of investigating the riots of 2020, according to a new Rasmussen Reports poll released July 21. Only 49% said they support House Speaker Nancy Pelosi’s January 6 committee investigation.

The poll showed strong bipartisan support for a Congressional investigation into the 2020 BLM riots. 75% of Republicans, 60 percent of Democrats, and 63% of non-affiliated voters agree that an investigation should be launched.

Only 21% of voters do not think Congress should investigate last year’s protests, and 13% are unsure.

People of diverse racial and ethnic groups feel the same way. 64% of black voters are in favor of an investigation, along with 67% of whites voters, 66% of Hispanics, and 62% of other minorities.

Respondents in the survey showed strong support for law enforcement, and a low tolerance for the crimes committed throughout the country during the BLM riots.

“Many elected officials of both parties and at all levels followed up, not by apologizing to their citizens for failing to uphold the law, but by accusing police officers of systemic racism, being in need of reform, reimagining and defunding” said Sgt. Betsy Brantner Smith, spokesperson for the National Police Association.

“When the mayors of cities in which violent riots took place in 2020 refused to let police immediately stop the crimes taking place, it sent a message to violent criminals across the nation that crimes will be allowed and criminals won’t be touched,” the NPA said in a statement.

53% of voters polled think Congress should award medals to the law enforcement agencies that defended their cities from violent looters and rioters in 2020, and 63% of voters think people who took part in the 2020 riots and looting should be prosecuted.

A strong majority of Americans, 65%, say that President Joe Biden and Vice President Kamala Harris should meet with the family of St. Louis Police Capt. David Dorn, who was murdered in 2020 when he was protecting his friend’s business from looters. Biden and Harris met with the family of George Floyd in the wake of Floyd’s death, but they have yet to meet with anyone in Dorn’s family.

Similarly, 65% disagree with Black Lives Matter activists who claim that the U.S. flag and the pro-police “Thin Blue Line” flags are symbols of racism.

A majority of voters, 62%, were tough on elected officials as well, expressing the belief that politicians who failed to acknowledge the violent 2020 riots should be criticized. A smaller percentage, 51%, believe elected officials who downplayed the January 6 riot deserve criticism.

An overwhelming majority, 76%, believe that without regard to race, all young people should be taught to comply with police rather than resist or flee arrest.

The poll surveyed 996 likely voters during the period of July 16-18, 2021. It was conducted by the National Police Association and Rasmussen Reports. The margin of sampling error is +/- 3 percentage points with a 95 percent confidence level.