Jason Whitlock: ‘Racist’ statues of George Floyd should be torn down 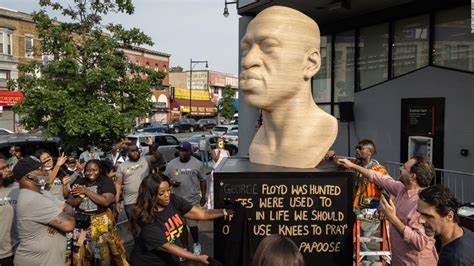 Sports reporter Jason Whitlock said statues recently erected to memorialize George Floyd are “offensive” to black people and should be torn down.

“The entire satanic cabal of cultural elites, both white and black, are using George Floyd and other forms of racial division to overthrow a flawed system of governance that has outperformed any other system ever invented,” Whitlock wrote in a column in The Blaze.

Whitlock went on to say the statues of George Floyd “denigrate and diminish the reputation of black men” and calls Floyd a victim of his own “drug addiction, self-destructive behavior and Derek Chauvin’s misconduct.”

Last week, statues commemorating the life and death of Floyd were erected in Newark, New Jersey, and Brooklyn, New York. The Newark statue is a 700-pound bronze sculpture of Floyd’s body sitting on a bench wearing a “wife-beater” shirt. The Brooklyn statue is six feet tall and has the likeness of Floyd’s head on a pedestal.

“It’s offensive to build a statue celebrating a man whose most memorable accomplishment is having a policeman kneel on his neck and back for nine minutes. It’s insane,” Whitlock argues.

“How does the George Floyd statue paint black men? The statue in Newark has Floyd seated on a park bench wearing a ‘wifebeater’ shirt. I’m shocked the sculptor didn’t put a crack pipe in one hand and a 40-ounce of beer in the other. The statues of Floyd need to be torn down immediately. They’re racist.”

The statues are designed to symbolize that America turns black men into “lazy, criminal drug addicts,” something Whitlock says he rejects in honor of the legacy of black men like, “Frederick Douglass, Richard Allen, Booker T. Washington, Benjamin Banneker, George Washington Carver, Thurgood Marshall, Clarence Thomas, Colin Powell, Muhammad Ali, Jackie Robinson, Ben Carson, Nat Turner, and so many more. I reject it on behalf of my father, my brother, and so many of my friends.”

Whitlock goes on to label Floyd nothing more than a “prop corporate media uses for attention, a pawn liberal politicians use to push policy and a punching bag social activists use as a symbol to explain black people and promote themselves.

“That is not the recipe for deification and statues. It’s a recipe for the impugnment of the character, integrity, and reputation of black people.”

“As black men, we must put a stop to politicians, activists, and corporate media using us for an agenda that doesn’t serve us. And those of you who love this country must join us in putting a stop to this exploitation and bigotry.”

Whitlock says “elites” denigrate black men as a means to “tear down America.” He added that “challenging the left’s systemic racism is the duty of every God-loving, patriotic American.”

Jason Whitlock is a sports commentator and radio host. He recently partnered with The Blaze for a daily podcast show called Fearless With Jason Whitlock, set to debut July 6.