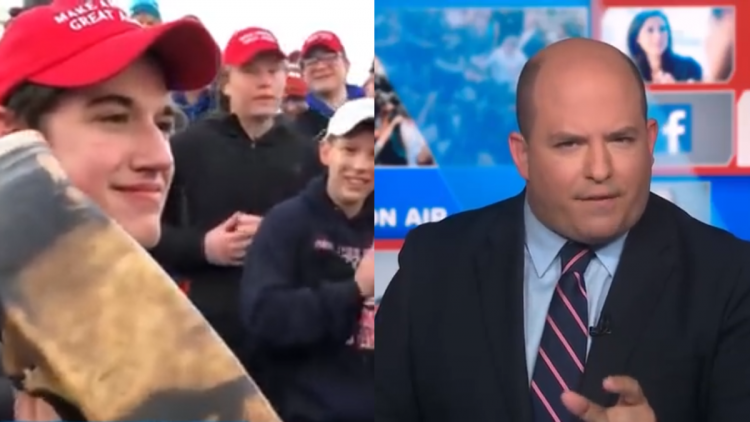 CNN’s Brian Stelter mocked the GOP this week for not trusting the media, but Nicholas Sandmann was right there to remind Stelter what being victimized by a false narrative looks like.

“Florida Gov. Ron DeSantis, a regular on ‘corporate media’ shows like Maria Bartiromo’s, says ‘we all know corporate media lies, OK? They do not tell the truth. Assume what they tell you is false and then figure out why they’re telling you a false narrative,’” Stelter tweeted Tuesday.

“GOP’s anti-media streak summarized: Governor of one of the biggest states in the USA says citizens should “assume” news outlets are lying to them,” he mocked.

Sandmann’s tweet has since garnered over 39,000 likes and nearly 7,000 retweets while Stelter’s had under 3,000 combined.

Sandmann’s story has become a cautionary tale on the state of journalism in the United States. After countless mainstream media outlets reported a false narrative about Sandmann and his classmates’ encounter with a Native American provocateur at the capital, Americans have used his victimization by the media as justification for not trusting journalists to tell the truth when there are political points to be gained through a false narrative.

“Wasn’t your network sued for 8 figures, which it subsequently settled, for defamation of a high school kid for false reporting about him?” one Twitter user asked, referring to the fact that CNN settled Sandmann’s $275 million defamation lawsuit.

RELATED: CNN’s Jake Tapper loses 75% Of His Audience Since January

“Or not reporting. What’s the Covid count in FLA? You used to tell us every day,” another person prodded, likely referring to the fact that while Florida and Governor Ron DeSantis have been a target of scathing attacks from the left in regards to the handling of the Covid-19 pandemic, Florida now boasts one of the the lowest Covid case counts in the country.