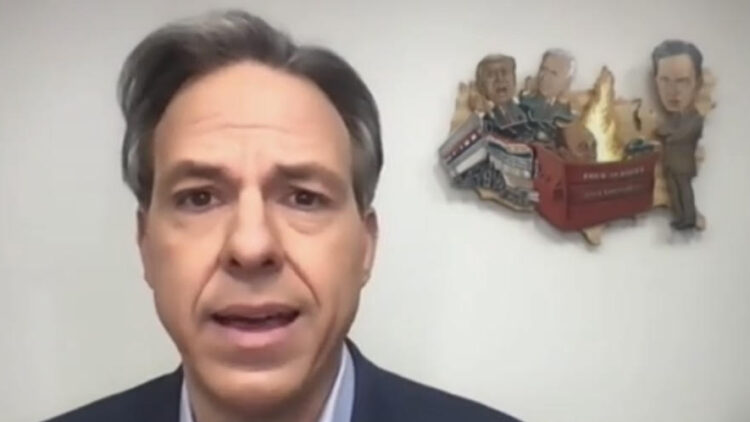 “The election lies are lies,” Tapper said during an interview for the Mother Jones Podcast with Clara Jeffery. “It’s no less a lie than saying the moon landing was faked or that the Holocaust didn’t happen or that Bush knew about 9/11 and let it happen. These are offensive ideas.”

Jeffery also questions Tapper on whether he would book conservatives on his show, The Lead with Jake Tapper. In late May, New York Times reporter Kara Swisher interviewed Tapper and asked him about the “dwindling group of people” he’s been able to book for The Lead. Tapper responds, saying he hasn’t booked anyone who purports the “big lie.”

“I have not booked, since the election, anyone who’s engaged in these lies. It’s not a policy but it’s just a philosophy where I just don’t want to deal with it…also, if you’re willing to lie about that, what else are you willing to lie about? And why should my viewers listen to you,” Tapper said. Swisher then pushes Tapper further, asking him again who he books.

“I would not book [Minority Leader] Kevin McCarthy (R-CA). [Minority Whip] Steve Scalise? I wouldn’t,” Tapper responds. “I don’t think any of them, Scalise or McCarthy or Stefanik, have faced a tough interview at all about it…but I’m not asking for the interview and they’re not eager to do it, no.”

Besides being CNN’s lead anchor, Tapper also has a career as a novelist. His most recent publication, The Devil May Dance, is a part of his series, The Hellfire Club. The Hellfire Club is the story of a fictitious congressman who meets real-life people such as JFK and Marilyn Monroe – although Tapper admits that he always invents “some tales” about the real-life figures in his books.

“You have to just let yourself make stuff up…but you try to be true to the idea, to the essence of the person,” Tapper said.

The Lead with Jake Tapper, which previously ran on weekdays from 4:00-5:00 p.m., was recently expanded by CNN. Now, the show runs from 4:00-6:00 p.m. in an attempt to draw viewers from Fox News’ The Five. Despite being the network’s lead anchor, Tapper’s show has lost 75% of its viewership since January in a trend that has impacted several CNN anchors.