CNN’s Brian Stelter slammed by guest on own show: You’re why ‘people can’t stand the media’ 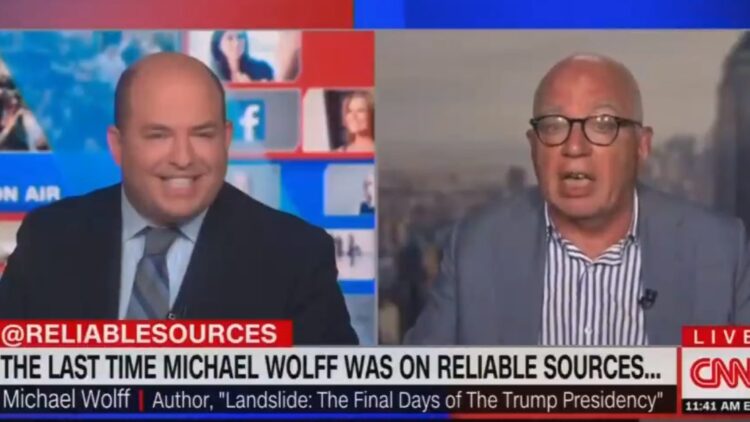 “You know, you are why one of the reasons people can’t stand the media. I’m sorry,” Wolff says to Stelter, who appeared surprised by the author’s comments.

RELATED: CNN’s Jake Tapper loses 75% Of His Audience Since January

Stelter replied, telling Wolff he was “cracking him up.” Wolff immediately replies to Stelter, saying, “It’s your fault.”

The on-air diss of Stelter comes after Wolff was asked about his previous appearance on the show four years ago. “You called me ridiculous. And you bashed the media. And then, the next day, Trump called you, and you guys chatted for half an hour, and you were all friendly,” Stelter says to Wolff, implying Wolff bashed CNN to get in touch with former President Donald Trump.

“I don’t want you to think that what I said at that point was in any way inauthentic,” Wolff responds. “I think the media has done a terrible job on this. I think you yourself, you know, well, you’re a nice guy, you know, you’re full of sanctimony…You become part of one of the parts of the problem of the media…You come on here, and you…have a monopoly on truth. You know exactly how things are supposed to be done.”

Appearing annoyed by Wolff’s assertions, Stelter asks him, “So, what should I do differently, Michael?”

“You know, don’t talk so much, listen more…People have genuine problems with the media. The media doesn’t get the story right. The media exists in its own bubble,” Wolff replies.

Wolff then goes into specific issues he sees with Stelter’s reporting.

“You know…You got to stop, I mean,  that last segment that I just had to listen to. Of all the people saying the same old stuff, Wolff says, referring to the previous guests, Perry Bacon and Charlotte Alter attacking Donald Trump and “right-wing media.”

“Also, you’re incredibly repetitive. It’s week after week. I mean, you’re the flip side of Donald Trump, you know, fake news. And you say virtuous news. You know, there’s a problem,” Wolff continued.

“No, we just figure out what is real. Yes, I’m listening,” Stelter replies.

“I mean, we, well, figuring out, yes, figuring out what is real is not so, it’s not so easy. And, you know, most people don’t want to turn to Brian Stelter to tell us what’s real. I’m sorry,” Wolff says.

Stelter pushes back on Wolff and asks him why he comes on CNN.

RELATED: Rep. Byron Donalds to CNN: ‘As a Black Man in America, I’m allowed to have my own thoughts’

The tense interview comes just weeks after Stelter was slammed by callers of C-SPAN while guest-hosting a show on the political news network to promote his new book, “Hoax.”

“Mr. Stelter is the biggest minister of misinformation I have ever heard, and I’m a news junkie,” said one caller from Indiana.

“I’d like to ask Brian to, on national television, admit he and his network are a bunch of liars about Donald Trump,” the first caller asked.