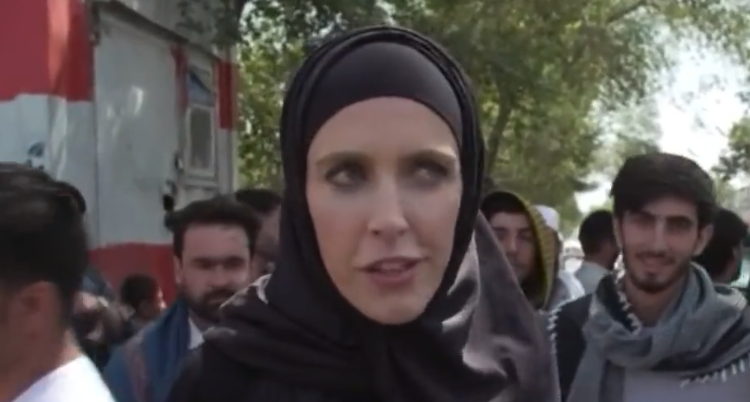 Clarissa Ward, CNN’s chief international correspondent, delivered a report from the streets of Kabul, Afghanistan wearing a hijab after Taliban forces took over the city.

“They’re just chanting ‘death to America’ but they seem friendly at the same time. It’s utterly bizarre,” Ward says while reporting on the Taliban takeover of Kabul.

“Wow, this beats the mostly peaceful protest headline, CNN always gives meme material. They are a media transformed into a comedy network,” said one Twitter user in response to Ward’s “they seem friendly” comment.

“As soon as we leave our compound, it’s clear who is now in charge,” Ward said during her report. “Taliban fighters have flooded the capital. Smiling and victorious, they took this city of 6 million people in a matter of hours, barely firing a shot. This is a sight I honestly thought I would never see: scores of Taliban fighters, and just behind us, the U.S. embassy compound. Some carry American weapons. They tell us they’re here to maintain law and order.”

Ward translates an interview she had with a Taliban fighter who told her that American needs to leave Afghanistan and that they have everything under control.

“Everything is under control. Everything will be fine,” the man says. “Nobody should worry.”

“What’s your message to America right now?” Ward asked him.

“America already spent enough time in Afghanistan,” she translated his answer. “They need to leave.” “They already lost lots of lives and lots of money,” the man says according to Ward’s translation.

Many pointed out the change in Ward’s clothing from just one day ago before the Taliban took over.

“Wardrobe change for CNN’s @clarissaward in Afghanistan today,” tweeted Jon Levine, along with before and after photos of Ward’s clothing while reporting from Kabul.

RELATED: Grenell, Olbermann spat over who’s to blame for Taliban takeover in Afghanistan: ‘Try debating instead of melting down’

“Unbelievable she now has to cover herself to cover a story,” said another Twitter user.

“If they seem so friendly, what’s with the headscarf suddenly?” asked one Twitter user.

“CNN reporter Clarissa Ward before and after the Taliban rule. The oppression of women has already started,” said another.

“They are so friendly that she put on a headdress before going anywhere near them, right?” Tweeted Josh Jordan.

Following immense criticism of their handling of the U.S. military’s withdrawal from Afghanistan, the Biden administration announced that the president will address the nation from the White House on Monday.