Biden’s false predictions for Afghanistan come back to haunt him: ‘talk about clueless’ 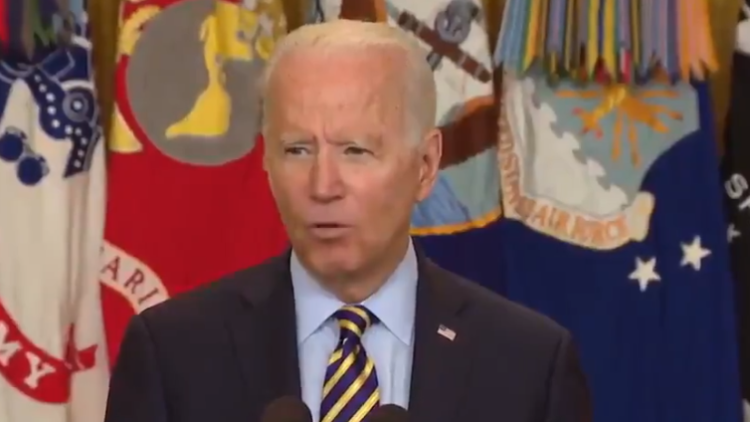 President Biden’s remarks about his plan to withdraw troops from Afghanistan during a July 8 press conference have recirculated after the fall of Kabul to the Taliban over the weekend.

Biden was asked if he saw “any parallels between this withdraw[in Afghanistan] and what happened in Vietnam?” during that now-infamous press conference.

“None whatsoever. Zero,” he responded. “What you had is, you had entire brigades breaking through the gates of our embassy. Six, if I’m not mistaken. The Taliban is not the South, the North Vietnamese Army. They’re not remotely comparable in terms of capability.”

“There’s gonna be no circumstance where you see people being lifted off the roof of a[sic] embassy of the United States from Afghanistan,” Biden added. Leaving many to compare his predictions for the war-torn nation and the actual events that unfolded over the weekend.

RELATED: Grenell, Olbermann spat over who’s to blame for Taliban takeover in Afghanistan: ‘Try debating instead of melting down’

Pictures of the evacuation of the U.S. embassy in Kabul showed exactly what Biden promised wouldn’t happen. Comparisons to the evacuation efforts in Saigon, Vietnam, from 1975 quickly spread across social media.

“US helicopters seen this morning at US embassy Kabul. It seems the evacuation is underway. Photo by @AP,” tweeted reporter Liz Sly.

“It took a liberal Biden for making an entire generation of US citizen feel ashamed of reliving Saigon. Trump must be smiling,” replied someone else.

“Wow, talk about clueless…..” replied another.

“It should be pretty easy to prove that the intelligence community warned the Biden admin of the potential for disaster in Afghanistan. Once that is proven, it then becomes definitive that Biden is a threat to our national security. What other warnings is he ignoring?” said another Twitter user.

“They did go back to Joe Biden‘s press conference of July 8 when a reporter asked him that very question. Joe Biden denied the intelligence community informed him that Afghanistan would fall,” replied someone else.

Former President Donald Trump released a statement calling for Biden to “resign in disgrace” over his handling of the withdraw in Afghanistan and the Taliban takeover of the country under his watch.

“It is time for Joe Biden to resign in disgrace for what he has allowed to happen to Afghanistan, along with the tremendous surge in COVID, the Border catastrophe, the destruction of energy independence, and our crippled economy,” Trump wrote. “It shouldn’t be a big deal, because he wasn’t elected legitimately in the first place!”

Over the weekend, Biden announced he would be sending 5,000 troops to Afghanistan to assist in the evacuation efforts to remove U.S. personnel and Afghans who allied with American forces.

The State and Defense Departments released a joint statement on Sunday evening regarding the evacuation efforts in Kabul.

“Tomorrow and over the coming days, we will be transferring out of the country thousands of American citizens who have been resident in Afghanistan, as well as locally employed staff of the U.S. mission in Kabul and their families and other particularly vulnerable Afghan nationals. And we will accelerate the evacuation of thousands of Afghans eligible for U.S. Special Immigrant Visas, nearly 2,000 of whom have already arrived in the United States over the past two weeks,” the statement reads.