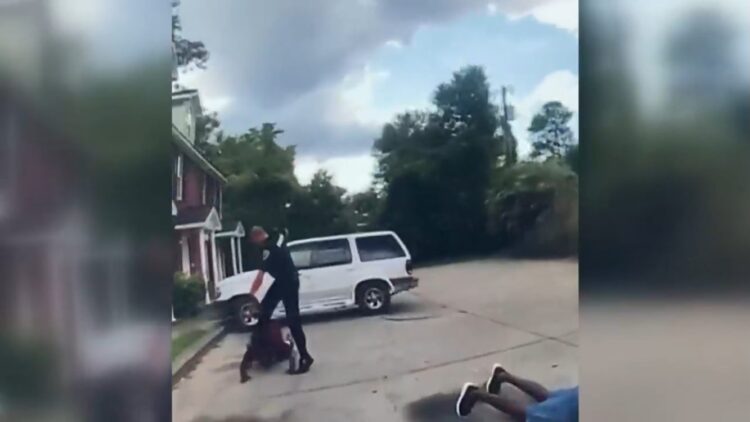 South Carolina police officer David Lance Dukes was fired and charged with first-degree assault and battery after bodycam footage showed him stomping on an African American man’s neck and head in a parking lot outside a relative’s home.

“If a person were to walk up to a defenseless dog and stomp on the dog in that fashion, video of that would go viral and millions of viewers, people across the planet, would be saying the citizen that stomped on that dog deserves to go to prison,” said Clarence Gailyard’s lawyer, State Rep. Justin Bamberg. “But it wasn’t a dog that got stomped on. It was a living, breathing human being and he’s sitting right here.”

RELATED: Liberty University police investigated for use of force during arrest of black man: ‘Get your knee off his neck’

Cops arrived at the Colleton Village Townhomes on July 26 around 5 p.m. in response to a 911 call about a man with a gun.

A female relative of Dukes made the call during a disagreement. Dukes was using a stick to bang on her door and window, trying to get inside. The incident report showed that during the call, the woman told police that Gailyard had a gun in his waistband, but she later said she had not seen a gun. She also later decided not to press charges.

The stick Gailyard was using in his attempts to access the house is something his lawyer says he always carries with him to fend off stray dogs. The stick was not the same object as the cane that Gailyard uses to assist him in walking.

Gailyard’s cousin, Demario Julian, was also on the scene when the police arrived. Both men were ordered to the ground. Gailyard said that due to a previous injury, he was not able to comply quickly. He has rods and pins in his leg, knee, and hip from when he was hit by a car while riding his bicycle.

“Officer Dukes ordered my client and another individual to get on the ground, but because of my client’s disability, he’s relatively slow,” Bamberg said. “He was trying to get down as fast as he could.”

“Officer Dukes then approached the victim, who was in a defenseless position on his hands and knees,” according to the warrant. “Officer Dukes raised his right leg and forcibly stomped with his boot on the victim’s neck and/or head area.”

An incident report written by Cpl. Brandy Smith describes the moment quite differently. “[Dukes] took his right foot, placing it on the subject Gailyard’s back, pushing him to the ground,” Smith stated.

Gailyard’s head hit the ground, causing a laceration to the face. He was later taken to the emergency room for examination and treatment.

“Every time I look in the mirror, I see the scar on my forehead, and it’s not OK,” Gailyard said. “The only thing I want the community to do is change.”

During the altercation, right before Gailyard was handcuffed, Dukes asks him about the alleged gun. “I ain’t got no gun,” Gailyard says. A search of nearby shrubbery failed to produce a gun, as did a search of his person.

“Y’all bust my head down,” Gailyard said. “You throw me down.”

“I sure did. You were not listening,” said Dukes.

“You didn’t have to throw me down like that,” Gailyard says, reminding the officers that he is disabled.

Bodycam footage from another officer on the scene shows Dukes explaining to his superior, Sgt. Aaron Maier, what happened. “Mr. Gailyard had a stick in his hand, and I thought it was a gun,” Dukes says. “Mr. Gailyard put the stick down and had his hands in his pocket.”

Sgt. Aqkwele Polidore had a word with Maier, telling him what Dukes had actually done, as Dukes failed to mention stomping on the victim’s head during his conversation with Maier.

“He is not telling the truth. Dukes kicked Mr. Gailyard in the neck,” Polidore can be heard saying.

Maier later labeled Dukes’s use of force as excessive and “highly recommended” an investigation by an outside agency.

Gailyard’s attorney said Polidore deserves a commendation for her behavior and that her integrity and leadership were exactly what citizens deserve from law enforcement.

“She didn’t lie. She told the truth,” Gailyard said. “All officers are not bad. Some are good.”

“In reviewing body-worn cameras, as well as available in-car camera video, Dukes’s account of what occurred in the report and as told to [the sergeant] was inconsistent to the actual event as captured on video,” the report states.

Investigators determined that Dukes’s actions were “likely to produce death or great bodily injury,” according to the arrest warrant.

Dukes’s defense lawyer, Jack Furse, told the judge his client has cooperated fully with the outside investigation.

Dukes, 38, was booked into the Orangeburg County Detention Center on Saturday and later released on a $10,000 bond. If convicted, he faces 10 years in prison. The Calhoun County Sheriff’s Office has also fired him.

RELATED: ‘Do or die’: Chicago’s top cop quotes poetry on city’s most violent day this year

“This is a difficult situation and an unfortunate situation,” Furse said. “He has absolutely no violent history, and he’s not a proclivity [sic] to violence.”

Independent Chronicle did not receive an immediate response from Mr. Gailyard’s attorney, Justin Bamberg, when contacted for comment.