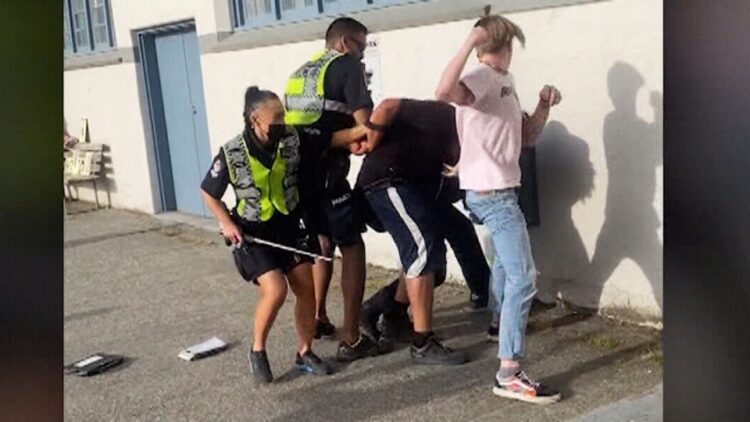 Cops in Vancouver, Canada, deployed their batons and fended off an angry mob after cuffing and restraining a black suspect for allegedly assaulting an officer moments earlier.

Angry bystanders shouted “racist motherf–kers,” “f–king racists,” and even attempted to intervene on the suspect’s behalf, who also shouted derogatory names such as “f-ggot,” at the officers while resisting arrest.

Police said the suspect, a black man in his 20’s, refused to leave after exhibiting “assaultive behavior towards police and the public.” They say he was causing others to feel “unsafe” and left multiple officers with injuries, including one who was sent for medical attention at a nearby hospital.

Video footage captured by a witness shows the moments shortly after the police have the suspect in handcuffs. The suspect is seen attempting to wrestle the two police officers, one male, and one female, while a bystander holding a cell phone gets involved.

After one of the officers grabs the phone out of the bystander’s hands and attempts to push him away, the man draws his fists as if to begin punching the officer before being dragged away by another bystander.

Witnesses claim that the suspect intended to break up a fight and was not the aggressor. “He broke up the fight, he didn’t do anything wrong and they’re over here arresting him and doing nothing to the white guy and it’s really messed up,” said witness Saina Rezaei.

“The officers tried to disperse the crowd, but one of the aggressors refused to leave,” says Vancouver Police Department spokesperson Const. Steve Addison.

“What happened last night was the direct result of this man’s assaultive behavior towards police and the public. It had nothing to do with race, and it is irresponsible to suggest otherwise,” Addison continued.

Police say multiple others were cuffed and detained in the aftermath of the incident. Addison said, “They were released a short time later after they had calmed down and agreed to leave the area. The original incident remains under investigation.”