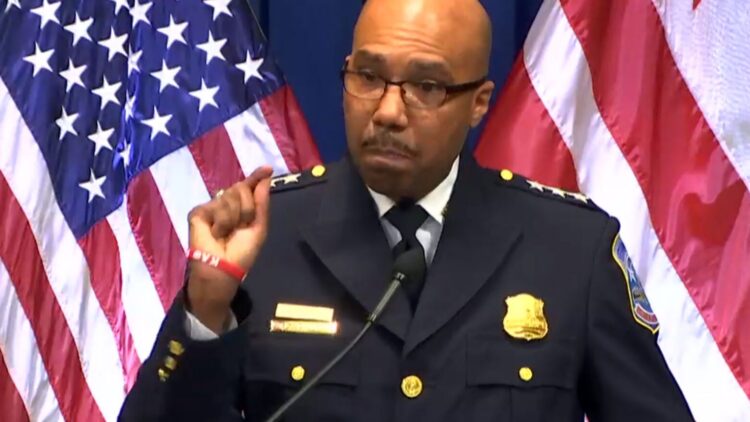 Washington, D.C. Police Chief, Robert Contee refuted the notion that the Jan. 6 Capitol Hill riot played a role in the suicide deaths of four of his officers.

“I think it’s very difficult to do that. I think it’s very hard to say it’s just this one particular thing that ultimately led to the situation that we’re dealing with right now,” Contee said.

When asked about the correlation between Jan. 6 and the officer suicides, Police Chief Robert Contee pushed back on the notion that one single event can be attributed to their deaths.

“Obviously, if people on the outside hear that these are officers who were on duty on January 6th, they might try to draw a parallel there. Can you do that?” asked Fox 5 DC anchor Steve Chenevey.

“I think that’s a very big leap to make. I think it’s easy to say, ‘yeah, it’s a common denominator.’ We have many officers that served on that day. Coupled with the prolonged stress of everything else that’s been going on over the course of the last 18 months,” he added. Over time, you know, we’re running our officers really into the ground at this point. So I think, you know, kind of taking that holistic look at all these things, you know, really we should be and not focusing on one particular thing.”

The D.C. Metropolitan Police Department confirmed the deaths of two more officers by suicide on Tuesday, bringing the total number of officers to commit suicide since the Jan. 6 Capitol Hill riot to four.

“We are grieving as a Department, and our thoughts and prayers are with Officer Hashida’s family and friends,” Metzger said.

“Officer Kyle DeFreytag, assigned to the Fifth District, was found deceased on Saturday, July 10th, 2021. He had been with the Department since November 2016,” MPD spokeswoman Makhetha Watson announced Tuesday.

MPD Officer Jeffrey Smith, a 12-year veteran of the force, and US Capitol Police Officer Howard Liebengood, a 16-year Capitol Police veteran, also responded to the Jan. 6 riot and later died by suicide.