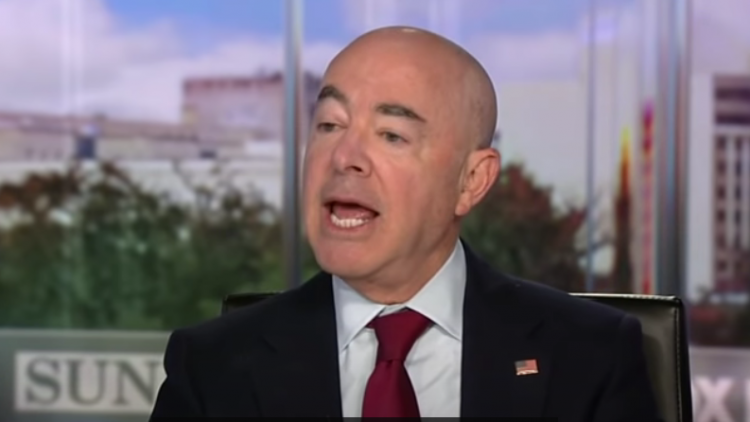 On Fox News Sunday, the Secretary of Homeland Security told host Chris Wallace that a border wall would obscure an American hallmark – coming into the country illegally and seeking asylum.

“That is actually one of our proudest traditions,” Alejandro Mayorkas told Wallace.

While interviewing Mayorkas during the segment, Wallace asked him, “Why did you allow them [illegal immigrants] in the country in the first place? Why didn’t you build – forgive me – a wall or a fence to stop them from walking in – this flood of people – coming across the dam? It looks like a highway that allows them to cross the Rio Grande.”

Mayorkas said the Biden administration opposes building a fence or wall and stands by that belief.

“It is the policy of this administration, we do not agree with the building of the wall, the law provides that individuals can make a claim for humanitarian relief, that is actually one of our proudest traditions,” Mayorkas told Wallace.

RELATED: Al Sharpton shouted down by hecklers during press conference on border patrol’s treatment of Haitians

“So are we talking about a total of 12,000 or could it be even higher?” Wallace pushed. Mayorkas openly admitted that the number could end up being much higher.

Currently in the U.S., removal proceedings can take 6 months to several years, and when those who are released from custody into the U.S. are scheduled for a court date in the future, nearly half do not show up.

“It just is a matter of reality, won’t many of those thousands of people end up settling here in the United States, some of them permanently?” Wallace asked, and Mayorkas indicated that those who miss their court dates are “high priority” for removal.

“But sir, there are more than 11 million people in this country illegally, clearly, despite your best efforts, millions of people end up in this country and don’t just disappear,” Wallace continued.

Mayorkas was unable to offer any reassurance about his immigration enforcement efforts, citing that it is common knowledge that the immigration system in the U.S. is broken and in need of reform.

Mayorkas’s statement comes as the most recent episode of the crisis on the southern border saw 15,000 migrants, mostly Haitians, huddled under a bridge as they made their way in droves across the Rio Grande into the United States.

Governor Abbott recently spoke out on his efforts to leverage state authority to secure the border and protect the citizens of Texas amid the failure of the federal government to do so.

“When you have an administration that’s abandoned any pretense of securing the border and securing our sovereignty, you see the onrush of people like what we saw walking across this dam that is right behind me,” he said.