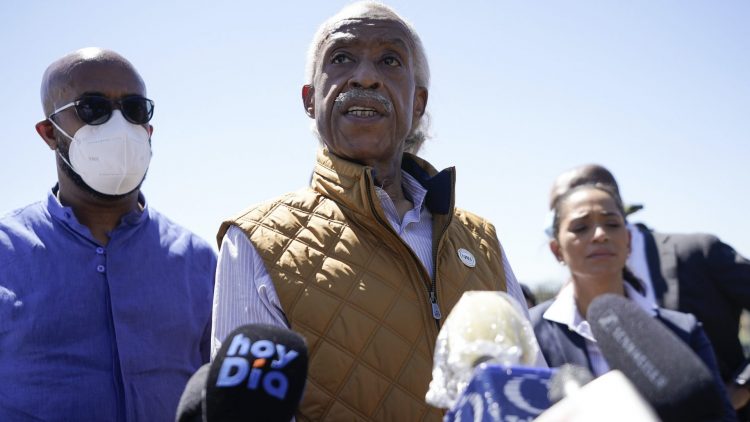 Rev. Al Sharpton was shouted down by protesters during a press conference in Del Rio, Texas, on the U.S. Border Patrol’s treatment of Haitian migrants.

“How much money are you making? Why are you here advocating for violence? Del Rio is not a racist city. Del Rio is a loving, caring community,” the men yelled at Sharpton while he attempted to speak.

Sharpton told reporters that he and his entourage toured “the place that we feel is a real catastrophic and human disgrace as people around this world watch the Border Patrol use slave-like techniques – mounted on horses.”

Sharpton was unable to explain what he and his group saw or learned during their tour and was also unable to take questions.

“The Trump supporters and the right-wingers can scream all they want,” said Sharpton, as he appeared to become agitated by the protestors.

“We gon’ continue to come back. We gon’ stand with our people to make sure that [unintelligble] is treated in one way and one manner. And we intend to come back over and over again. For people to be treated like this in an inhumane way, for people to feel that they can use weaponization of horses to treat human beings…” he said.

Photos of a Border Patrol agent on horseback caused outrage from Democratic lawmakers who claimed the behavior was worse than slavery.

“What we witnessed takes us back hundreds of years,” Rep. Maxine Waters (D-CA) said. “What we witnessed was worse than what we witnessed in slavery: cowboys with their reins, again, whipping Black people, Haitians, into the water, where they’re scrambling and falling down, and all they’re trying to do is escape from violence in their country.”