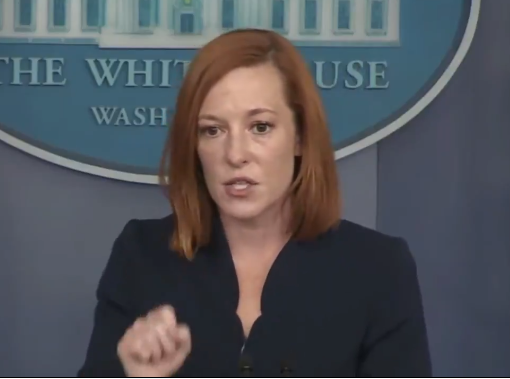 Press Secretary Jen Psaki said the Biden administration would appreciate some workable suggestions from Republicans instead of empty indignation over the border crisis, and her comment didn’t sit well with many on the right.

“There are a lot of Republicans out there giving speeches about how outraged they are about the situation at the border. Not many who are putting forward solutions,” she said Friday.

“How about we just listen to the 9/11 commission which recommended building a border barrier along the Mexican border and revamping our visa system to make it harder for people to overstay,” tweeted Ryan James Girdusky.

Michael Knowles kept his comment short and to the point. “Build the wall,” he wrote on Twitter.

Psaki expressed frustration with the politicization of the border crisis. “We’re a little tired of the speeches,” she said.  “I’ve got it! Why don’t we…. BUILD BACK BETTER!??” tweeted one person.

“Republicans have been saying it for years now, @PressSec…BUILD THE DAMN WALL!!!! #BuildTheWallNow!!!!!!!” another person tweeted.

“- Border Wall – Remain in Mexico – Making illegal immigration a net negative for the masses who attempt it – Immediate deportation – Enforcing employment laws Off the top of my head,” another person replied.

“I remember this guy who ran for this thing one time with the entire campaign mantra BUILD THE WALL. He also brokered these little things call [sic] Safe Third Country agreements and Remain in Mexico that solved the entire immigration crisis. Wonder what happened to those,” tweeted Tiana Lowe.

Psaki’s statement comes as the crisis on the southern border reaches unprecedented levels.

“The President is at the apex of his power when it comes to national security and border security. And yet, he literally turned over Afghanistan to the Taliban. And now he’s ceding control of the border to the cartels,” said Arizona Attorney General Mark Brnovich.

“I’ve been patrolling the borders since Clinton was the president, and I can tell you personally, that the policies that have been in place were by far the best under President Trump and President Biden completely and totally dismantled all of those policies,” NBPC President Brandon Judd told Fox News host Sean Hannity.