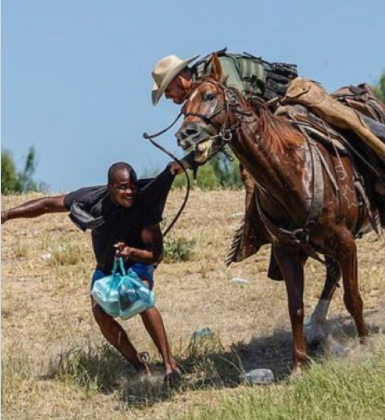 Axios was forced to backtrack their claim after jumping the gun and declaring Border Patrol agents were using whips on Haitian migrants on the southern border.

“We deleted a previous tweet that referred to Border Patrol agents as whipping at Haitian migrants. The story has been updated to include comments from some journalists on the border who did not see whipping occur,” Axios said in a Twitter statement on Sunday.

Pictures surfaced last week of mounted Border Patrol agents defending the U.S. border in Texas against a huge influx of migrants, primarily from Haiti. Migrants crossed the Rio Grande by the thousands, and as many as 15,000 camped out under the Del Rio bridge in one of the most widespread illegal immigration crises our nation has seen.

The agents, riding horseback, were photographed in action, with the reins flying during pursuit. Many media outlets like Axios failed to identify the reins as such, and cited them as evidence that the agents were “whipping” migrants. Other photos of the same incident from different angles show nothing that indicates Border Patrol was abusing migrants.

“They did this on purpose knowing full well they were lying. They know that most people get their opinions from headlines, they don’t read the articles. Then once their opinion is formed, confirmation bias takes over and no retraction will ever change their minds,” one person tweeted regarding Axios’ reporting.

The photographer, Paul Ratje, also went on record saying, “Some of the Haitian men started running, trying to go around the horses,” he said. “I didn’t ever see them whip anyone with the thing. He was swinging it, but I didn’t see him actually whip someone with it. Those definitely can be misconstrued when you’re looking at the picture.”

During Joe Biden’s presidency, the immigration crisis on the southern border has grown to massive proportions. The Biden administration has not seen fit to continue the “Remain in Mexico” policy and the construction of the border wall, both of which saw success under President Trump.

Despite ample evidence that no “whipping” incident occurred, President Biden called for a full investigation of the incident and banned Border Patrol from riding horses.

“To see people treated like they did? Horses running them over? People being strapped? It’s outrageous. I promise you, those people will pay,” Biden said during a press conference.

RELATED: Al Sharpton shouted down by hecklers during press conference on border patrol’s treatment of Haitians

Texas Governor Greg Abbott has taken responsibility for securing the southern border amid the failure of the federal government to do so. Abbott also backed the Border Patrol, declaring that he would hire the agents if punished by the Biden administration for the false whipping scandal.

“…if [Biden] takes any action against them whatsoever, I have worked side by side with those Border Patrol agents. I want them to know something, if they are at risk of losing their job, got a president who is abandoning his duty to secure the border, you have a job in the state of Texas. I will hire you to help Texas secure our border,” Abbott vowed to the Border Patrol agents.