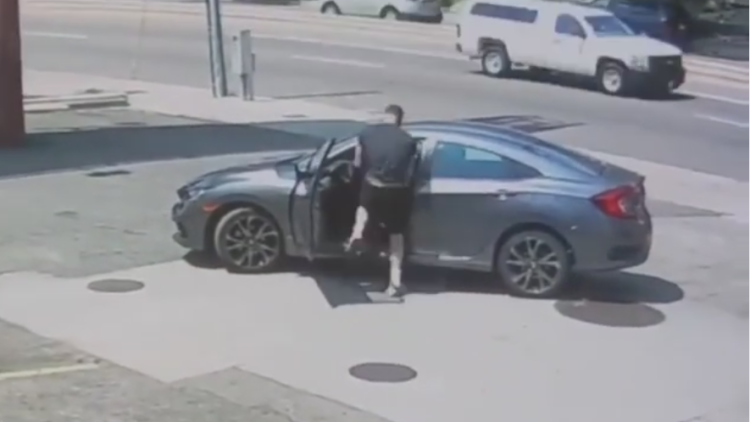 UFC fighter Jordan Williams stopped a thief from stealing his car in broad daylight by dragging the man out of the moving vehicle as he tried to drive out of a convenience store parking lot.

“Wish I would of hit him with the trip after the clinch work when I tossed him out of the whip, and finish off with some ground and pound but I’ll settle with getting my car back,” Williams wrote on Instagram when he posted footage of the foiled robbery.

Security cam footage shows Williams walking into a convenience store, and as soon as he enters the building, a man immediately makes his way towards the car, opens the door, and gets in.

Williams explained on Instagram that his car could be started as long as the key fob is within a few feet of the car. “Needless to say, my lesson was learned,” he said.

As the thief gets the car started, Williams runs out of the convenience store, accosting the now-moving vehicle.  “he didn’t know to release the parking brake,” Williams said, explaining why the car was moving, but at a relatively slow pace when Williams reached it.

Once he gets to the car, he opens the door and drags the thief out of the car, tossing him aside. “I punched the guy a couple of times. At that point, he was saying he’s sorry, just repeatedly,” Williams said.

“🙀🙀 messed with the wrong one,” said one Instagram user. “He choose the wrong car to steal 😂,” agreed someone else.

“You know what they say: You miss out on 100% of the pro fighters’ cars you don’t attempt to carjack. No pain, no gain,” said one person on Instagram.

“He thought he could rob him… cuz he saw his fanny pack,” quipped one person, referencing Williams’s fashion accessory. “I know you see the stillness [sic] of that fannypack, fannyback [sic] game was on point this could be a commercial for them 😂” he laughed.

“I will never fuck with someone with a fanny pack again,” said another person.

“Gotta be quicker than that”😂🎣,” commented someone else.

“What I’ll remember always is the look on his face when he was looking at me through the window like, ‘I’m taking this,’” Williams said.

Williams took the opportunity to address all criminals and would-be criminals: “My message to crooks is don’t steal. Double check yourself in broad daylight. And watch out for that fanny pack.”

He also warns people to lock their cars and never leave them running.

RELATED: Man arrested after ‘I love being white’ stickers placed on cars, in bathroom at Mexican restaurant