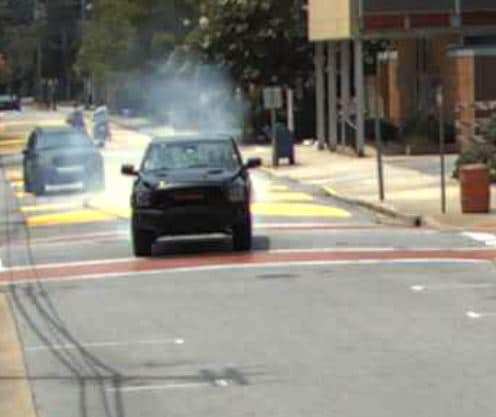 A truck was seen doing burnouts and leaving skid marks over top the words “Black Lives Matter” which were painted on a street in Elizabeth City, North Carolina only one day earlier.

“Silly rabbit, tricks are for kids. Do you think we would invest in a mural and not have adequate surveillance? You sir are going down,” said City Councilman Darius J. Horton in response to the vandalism.

RELATED: Denver jury finds woman who ran over protestor not guilty of assault

“I was utterly disgusted to learn that just hours after we dedicated it that an individual would try to defame and deface that, after the artist worked so hard to make that a reality,” said Horton.

Colonial Avenue, the road where the words were painted, had been closed for two weeks to allow artist Michael Little to finish. Little says they plan to repair the writing as soon as possible.

At issue is a scarcity of paint, said City Manager Montre Freeman, who added the paint used to complete the mural was provided by donations. When asked if he believed the vandalism will discourage residents from donating again, he said, “I don’t think so.” The police are investigating the incident, according to the Elizabeth City Police Department.

City Council had approved the mural following the shooting death of Andrew Brown Jr. by a police officer on April 21. The mural was chosen by a contest where members of the community could vote for the winner. According to the photos captured by city surveillance cameras, the vehicle that caused the skid marks is a black Dodge RAM extended cab pickup truck.