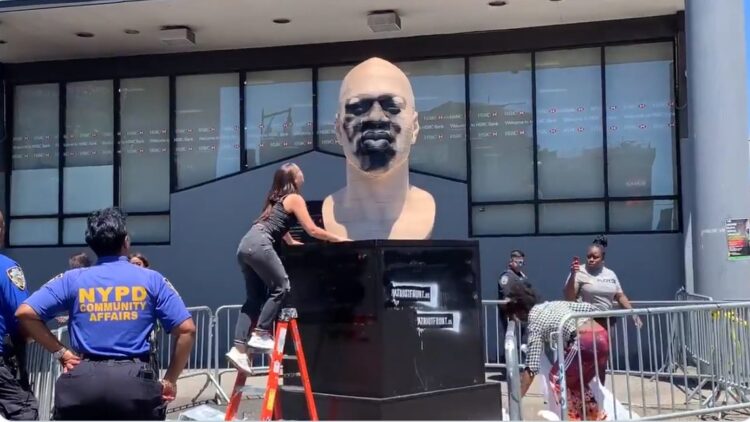 A pair of Geroge Floyd statues have been vandalized with black spray paint and white wording with the name of an alleged white nationalist group.

“Last night a far-right extremist group vandalized a statue of George Floyd in Brooklyn. A racist, loathsome, despicable act of hate. The City Cleanup Corps is repairing the statue right now and a hate crime investigation is underway. We will bring these cowards to justice,” New York City Mayor Bill de Blasio tweeted in response to the vandalism.

The vandalism included spray painting black over the gold-lettered quotes around the sides of the statue and also spray painting over Floyd’s face in black. In white are the words PatriotFront.us. The website for Patriot Front includes a long manifesto detailing how they intend to “reclaim America” from tyrannical politicians.

“The defacing of the statue of George Floyd has been a trend around the country,” Newark Mayor Ras J. Baraka said in a statement. “This horrible act is the very reason that this statue needs to remain and be upheld. As this is not just about George Floyd, it’s a deliberate effort to push back against and ultimately dismantle systems of hatred, racism, and white supremacy. We celebrate those efforts in Newark, and will continue to do so, despite the ignorance that has reared its ugly head.”

Police in both cities are conducting investigations into who is responsible for the vandalism and no suspects have been charged at this time.

“Our mission is a hard reset on the nation we see today— a return to the traditions and virtues of our forefathers. The same spirit that urged our ancestors onward to create this nation will once again be brought to light, and a new America will be built within its current dilapidated, shameful iteration. Generation after generation lived in war and strife so that their descendants may know peace. It was their duty to give their lives in such a way. The torch is now passed to our generation, and it is our duty to make their sacrifices mean something,” Patriot Front’s manifesto states.

There is no mention of taking responsibility for the act of vandalism on the group’s website. The Independent Chronicle reached out to the group for comment but did not immediately receive a response.

The vandalism comes after sports and political commentator Jason Whitlock wrote a blistering op-ed regarding the memorializing of George Floyd.

“The entire satanic cabal of cultural elites, both white and black, are using George Floyd and other forms of racial division to overthrow a flawed system of governance that has outperformed any other system ever invented,” Whitlock wrote.

Whitlock called for the immediate tearing down of Floyd’s statues, calling them racist and saying they “diminish and denigrate” black men.

He added that the statues are designed to symbolize that America turns black men into “lazy, criminal drug addicts,” something Whitlock says he rejects in honor of the legacy of black men like, “Frederick Douglass, Richard Allen, Booker T. Washington, Benjamin Banneker, George Washington Carver, Thurgood Marshall, Clarence Thomas, Colin Powell, Muhammad Ali, Jackie Robinson, Ben Carson, Nat Turner, and so many more. I reject it on behalf of my father, my brother, and so many of my friends.”