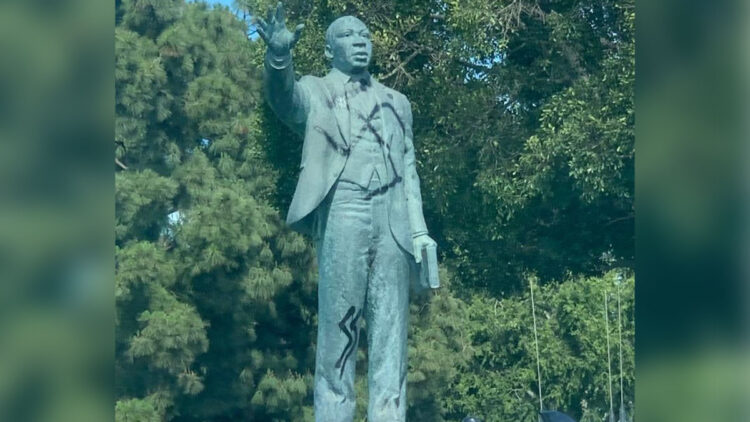 A statue of civil rights leader Martin Luther King Jr. was vandalized with graffiti images of a swastika and SS bolts in Long Beach, California, Friday.

“The incident is being investigated as a possible hate crime, and there are currently no suspects nor suspect information available,” Richard Mejia, an LBPD spokesman, said.

“It’s just so painful,” Long Beach resident Mary Simmons said. “I want to cry every time I think about it.” “Especially right now with all the uprising, and this? We’re not going to take this sitting down,” she added. “We are tired of being silenced.”

Simmons says she and other residents held a “peace rally” in front of the statue Saturday. The local parks and recreation department has since cleaned the statue of the graffiti.

The statue of King was erected after his assassination in 1968, and the park, formerly known as the 19th Street Park, was renamed the Martin Luther King Jr. Park in honor of the fallen civil rights leader.

“I’m shocked and disheartened by the recent hate graffiti on the statue at MLK Park. It’s troubling that this act happened in a core area of our LB Black community,” tweeted Al Austin II, a member of the Long Beach City Council.

Long Beach Mayor Robert Garcia tweeted a statement in response to the vandalism.

“Over the holiday weekend our MLK statue at King Park was vandalized with horrific graffiti. The LBPD are investigating this as a hate crime and we are working to catch whoever committed this awful act. Our MLK statue is a symbol of hope and justice for the community. This hate and desecration has no place in our city.”

The Floyd statues are meant to commemorate the life and death of George Floyd, the man killed by former Minneapolis Police Officer Derek Chauvin. The Floyd statues received backlash from those who disagreed with commemorating the life of a man who was known for using drugs and assaulting women.