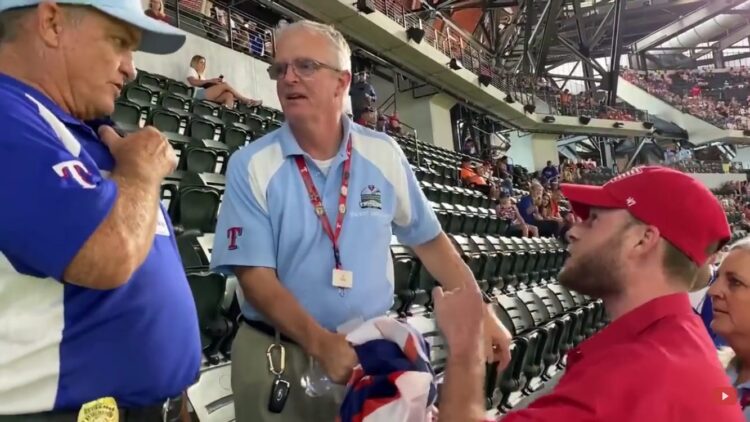 Ballpark security expelled a fan from a Texas Ranger game Sunday after he hung a ‘Trump Won’ flag from an upper level of Globe Life Field.

“I held a sign at a baseball game, and they called the cops. This is how out of whack America is,” the fan, identified as Owen Shroyer, told the camera as the incident played out.

Shroyer, an alt-right political activist and contributor on the podcast ‘InfoWars,’ displayed the flag during the 7th inning of the game along with at least one other person. Security quickly descended on them and tried to confiscate the flag. Shroyer cooperated with the security officers in taking down the flag, but refused to hand the flag over to them.

“You know the rules, you cannot take my flag,” he maintained. The security officer seems uncertain, but responds, “Yes, I can.”

“No, you cannot,” says Shroyer, who ultimately kept the flag in his possession.

Shroyer followed the security officers out of the stands, shaking hands with a young fan on the way out, and loudly and continuously proclaiming that the election was stolen and that Trump won.

He was detained by security and they informed him they had contacted the Arlington Police Department. “We don’t even have free speech and the cops get called because someone has a flag,” he said. “They steal our election, nobody panics, one person drops a flag at a baseball game and they want to call the police.”

The unidentified fan holding the other end of the flag and standing a few feet behind Shroyer as he addressed the camera wore a “Biden for Nursing Home 2020” t-shirt.

Shroyer is not the first MLB fan to be escorted out of a ballgame for displaying ‘Trump Won’ banners. Similar incidents have occurred during Red Sox, Mets, and Yankees games as well.

The Rangers said the banner violated the stadium’s code of conduct for guests at games.

The APD stated there were no incidents at the ballpark Sunday afternoon that resulted in a police report being filed or an arrest being made.