Mother, daughter removed from flight after threatening to ‘scream’ and ‘grab onto people’ for not getting aisle seat 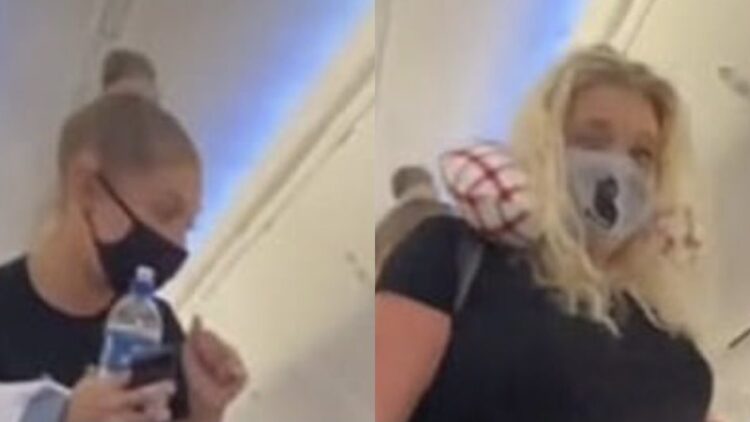 A woman and her daughter were removed from a Southwest flight after causing a scene over not getting an aisle seat on the first-come, first-serve plane.

The mother-daughter duo, dubbed Karen and Karen 2.0, began pestering other passengers to give up their seats so they could have an aisle seat. Once flight attendants told them they could not do that, the daughter says, “We’ll just go sit down, we’ll just go sit down and she[the girl’s mother] can just cry and scream on the plane. She’s gonna grab onto you and choke [inaudible].”

The flight attendant heard the threat of choking other passengers and explains to the woman that she can not be on the flight and make threats.

“Okay, ma’am, if you’re going to say things like that then we have to put you on a different plane,” the attendant says.

The two women are later shown being escorted off the flight with the caption, “Thank you SWA for removing the Karen’s from our flight!!!”

Other TikTok users commented on the entitled behavior of the two women.

“If it’s so important to have an aisle seat they should have flown an airline where you can reserve your seat. Not southwest,” one user said.

“We need to pay flight attendants more money,” said another.

“It’s the privilege they thought they could use,” said someone else.

“I love how she is trying to play victim to another passenger,” said another.

RELATED: Girl accuses Alaska Airlines flight attendant of ‘slut shaming’ after asking that she zip up her sweatshirt

In April, a woman was booted from a South West flight after refusing to wear her mask. After an argument with the flight attendants, the woman was forcibly removed while flipping off the other passengers who clapped and cheered at her removal.