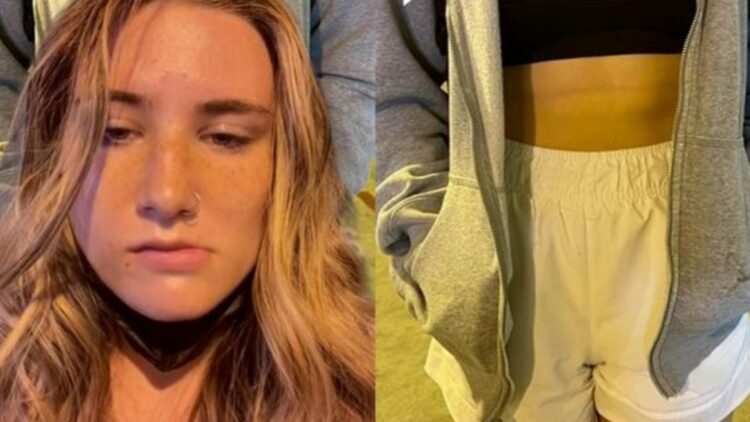 Sierra Steadman posted a video to TikTok alleging that an Alaska Airlines flight attendant ‘slut shamed’ her for her choice of clothing while boarding a flight.

“[I]ve never felt more degraded, ashamed, embarrassed, angry or sad. F [sic] ALASKA AIRLINES!” Steadman wrote in the caption of her video in which she appeared to shed tears while music played in the background.

The on-screen text reads, “when the flight attendant s1uT [sic] shames you in front of the whole plane and threatens to kick you off you for what your wearing.”

Steadman’s video has received 6 million views since being posted on Sunday. She posted a follow-up video explaining what she was wearing on that day.

Steadman’s outfit consisted of shorts that cut off above her knees, a crop top that exposes her entire torso, and a zip-up gray sweatshirt. After her video received multiple comments of people telling her she should have abided by the plane’s dress code, Steadman posted another follow-up video explaining the situation further.

While boarding the plane, she said that the flight attendant stopped her and asked her to zip up her jacket. Steadman said she started to do so and continued walking to her seat. She then accused the flight attendant of “grabbing” her arm, pulling her back, and then proceeded to yell at her “in front of everyone.”

“I had no problem with her asking me to zip up my jacket,” Steadman said. “You know what, it’s her plane. She works on the plane. If that is what she wants, then I will zip up my jacket.”

“My problem is with how she acted after I complied with her request,” she repeated multiple times. “So these comments can stop,” she added.

“We are in contact with Sierra and her family and are committed to finding out what happened and taking all appropriate action,” Alaska Airlines said in a statement.