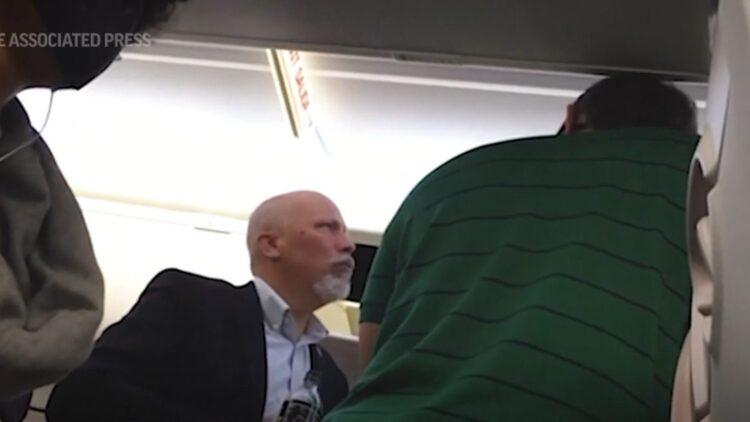 Rep. Chip Roy (R-TX) was seen unmasked while aboard a commercial airline flight Tuesday evening, despite federal law requiring them.

A three-minute video was taken of Roy speaking with other passengers while maskless during his flight from Washington D.C. back to his home district in Austin, Texas. Roy’s trip to Texas was part of his meeting with former President Donald Trump at the southern border amid the ongoing migrant crisis.

Roy is an outspoken critic of mask mandates and co-sponsored a bill that would eliminate the mandate for passengers on airplanes and other forms of transportation.

“Proud to join @RepThomasMassie to stand up for every student and every hard working American wanting the insanity to end,” Roy tweeted in May in support of Rep. Thomas Massie’s refusal to wear a mask while on the House floor.

“We’ve had enough. We are refusing to wear our masks on the floor during this vote in spite of Pelosi’s threat to take $500 from each of us. Her rule is not based on science. All you need to know is the mask rule has only ever applied to members when they can be seen on TV!” Massie tweeted.

Roy expressed his lack of concern over wearing masks on an airplane in an interview with CNN in July 2020. Roy said he’s not concerned “any more than the interactions with perfect strangers on an airplane with circulating air. With cotton masks on an airplane, where everybody is pretending like they’re doing something noble to try to save people from a virus on a cylinder with 50 people on it flying through the air.”

“My question to you all is how are people wearing a cotton mask on an airplane saving you from circulating virus on an airplane?” he added.

Federal law states that those who fail to mask up on planes are subject to civil fines, ranging from $250 for the first offense and up to $1,500 for repeat offenders.