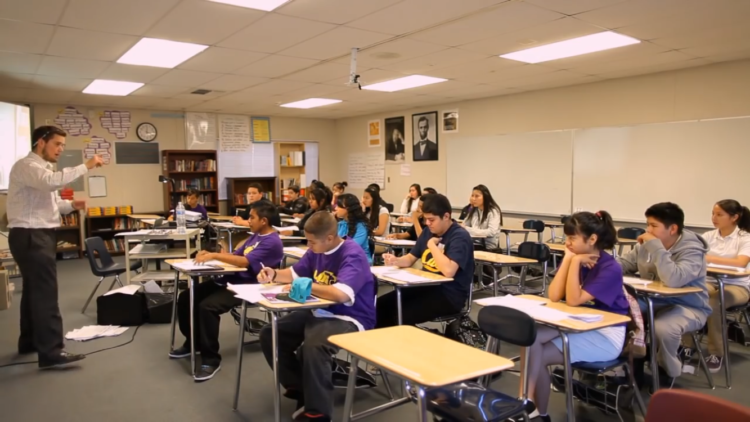 The College Board has been accused of indoctrinating students in ‘woke’ politics by requiring them to choose an answer on an AP Government exam indicating voter ID discourages black people from voting.

“Nothing to see here, just an official AP Government practice exam forcing students to falsely say voter ID is racist and urging them to overturn voter ID laws in order to pass the test,” tweeted Sean Davis, co-founder of The Federalist.

RELATED: Former NFL star to run for local school board in response to school mask mandate

The multiple-choice question asks, “Based on the infographic, which of the following claims would an opponent of state voter-ID laws most likely make?”

Students’ options for an answer are as follows:

Answer A is correct per the test rubric.

The following question on the test asks: “Based on the infographic, which of the following strategies would a group seeking to increase turnout likely pursue?”

Students are expected to select “Lobby state legislatures to overturn voter-ID legislation” in order to be marked with a correct answer.

“Education used to teach kids HOW to think. Now, the focus seems to be only teaching kids WHAT to think. It’s no longer about teaching skills, it’s about indoctrinating,” tweeted an account called the “Concerned Teacher.”

“The left continues to insult the intelligence of marginalized communities…,” observed someone else.

“Pretty sure voter id isn’t at all racist. If that were the case & it prevented poc from voting why do ppl need it to get housing, foodstamps, grants, loans, ect.[sic] They seem to be able to access these things just fine why would voting be any different,” tweeted another user.

“Indoctrination! These are ‘practice’ tests pushing the agenda that Blacks are somehow incapable of getting an ID,” remarked someone else.

The College Board administers the SAT as well as AP tests. “The funniest thing about this is that you have to show an id to take the SAT,” observed another person.

However, some didn’t find the content alarming and maintained that the questions were more focused on student reasoning than any political agenda.

“That’s not what this says. It calls on students to base their reasoning on the infographic and project what the likely behaviors of others would be. It’s a political analysis, not a purity test,” said one person.

“Not even close to what the question was about. It required logical reasoning, not any particular viewpoint. And it didn’t “urge” any action. But go ahead & disingenuously demagogue to feed your ego w/ likes & RTs,” replied another.

The data that the exam questions were based on has also come under fire, with some questioning its accuracy.  The questions are based on survey data conducted by the Brennan Center for Justice, which has ties to Democratic megadonor George Soros through funding. The group receives funding from the Kohlberg Foundation, Tides Foundation, and others which are all Soros-backed.

“[Brennan Center] cites various studies to back the data up, mostly a telephone survey,” said Peter Wood, president of the National Association of Scholars.

“So, one has to wonder how one gets a telephone without having an ID. There is something a little fishy about the Brennan survey technique to begin with. Lots of other people have expressed skepticism of the accuracy,” he continued.

RELATED: Parent files suit against school that separated students based on race

Wilfred M. McClay, a professor of history at Hillsdale College, agrees that the test and the College Board itself should bear further scrutiny for the politicization and calls into question the integrity of the education material they produce.

“Under the College Board’s previous leadership, the AP exams were considered the ‘gold standard’ of evaluative standardized testing,” said McClay. “But not anymore. Now the College Board is becoming a purveyor of fiat currency, and its reputation is increasingly suspect.”