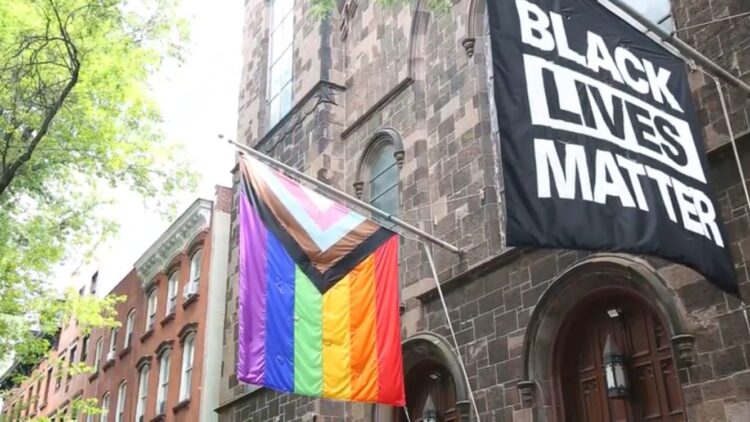 The Newberg school board voted 4-3 to ban BLM and Pride flags, signs, and attire in district buildings, but not without lively debate at their meeting Tuesday.

“The main goal of this is to get political symbols and divisive symbols out of our schools so we can focus on the already difficult task of educating our students in the core subjects,” school board director and vice-chair Brian Shannon said.

Shannon asked the board to ban clothing with political symbols on them, as well as flags and signs.

“Black students and other kids of color are under attack in Newberg schools,” parent Tai Harden-Moore said. “I know this to be true because my son was called a n—– at school.” Harden-Moore maintained that a BLM flag in the classroom would help her son feel safe at school.

“Sadly, policies that were implemented in good faith to ensure every student that attends a Newberg public school does so with a sense of belonging, safety, and security came under attack when this non-partisan board seated its new directors,” she continued.

“Research shows an affirming school environment improves behavioral, academic, and mental health outcomes for all students,” agreed Caitlin Collins, who is married to a Newberg teacher.

“The BLM and LGBTQ ideology and curriculum are shattering the innocence of children, promoting racial divide and negatively impacting the lives of our children forever,” a woman advocating for the ban stated.

In the wake of the controversial ban, the Newberg School Board will likely re-examine a policy called “Every Student Belongs,” a state Department of Education measure. It seeks to create an inclusive environment for all students while banning hate symbols such as the confederate flag and the swastika.

The prospect of taking another look at the policy and potentially changing or editing it is the wrong decision, according to Oregon state representative Ricki Ruiz (D).

“At the national level, we’re seeing a trend of school boards rolling back anti-racism and anti-discrimination protections, which I believe is truly unacceptable,” Ruiz said.

The district’s team of lawyers will need to sign off on the legality of the ban on BLM and Pride symbols at school before it can be enforced.

Newberg Public Schools did not immediately respond when contacted for comment.