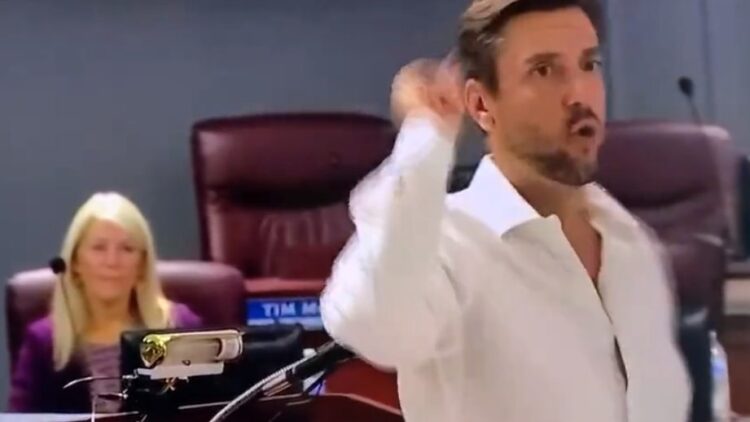 Radio host Clay Travis spoke at the Williamson County School board meeting to advocate that parents refuse to mask their children when sending them to school.

“Have any of you ever mandated masks for the seasonal flu?” Travis asked rhetorically of the school board members seated in front of him. “Well, shame on you. Because every kid in Williamson County Schools have been under more danger from the seasonal flu every year than they are from COVID. I would tell every parent here, don’t let your kids wear masks. Refuse! Refuse!”

“This makes me want to move to Tennessee! Stay strong! Keep up the fight! Covid is the greatest heist ever in the history of the world!” replied one Twitter user.

“Spend some time with families of children with a chronic lung disease like cystic fibrosis, and their doctors, and you might change your stance,” replied another.

“Listen man I agree with most of the things you say. However, I just don’t see the issue with wearing masks indoors until this whole covid thing blows over. My kids went to school in person last year wearing masks and didn’t get sick once – which is virtually unheard of lol,” said someone else.

In June, Travis joined conservative commentator Buck Sexton to co-host the Clay & Buck Show which took over the 12 p.m. to 3 p.m. time slot on radio after the death of Rush Limbaugh.

“My man @ClayTravis laying down the law on the mask maniacs at his local school board meeting,” Sexton, a vocal opponent of mask mandates, tweeted in support of Travis’ speech.

The Center for Disease Control and Prevention (CDC) guidelines for students returning to K-12 grade education be masked at all times while indoors if over the age of 2.

“In addition to universal indoor masking, CDC recommends schools maintain at least 3 feet of physical distance between students within classrooms to reduce transmission risk,” the CDC says. “When it is not possible to maintain a physical distance of at least 3 feet, such as when schools cannot fully re-open while maintaining these distances, it is especially important to layer multiple other prevention strategies, such as screening testing.”

The Independent Chronicle reached out to Travis for comment but did not immediately receive a response.