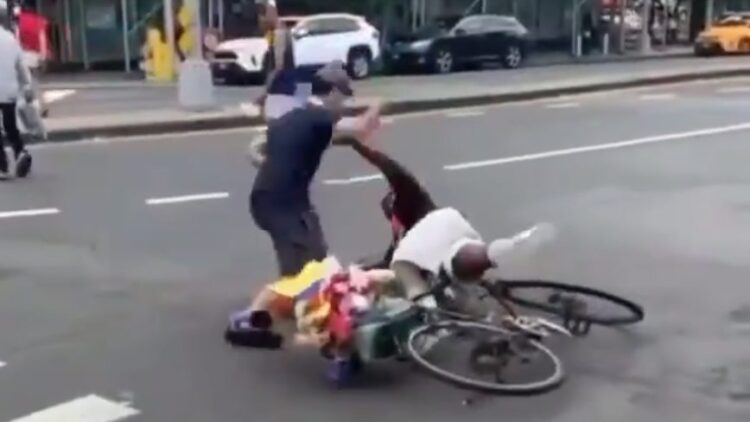 A black man yelling anti-Asian comments at a group of pedestrians was punched in the head and knocked to the ground in New York City.

“I swear you motherf—ers, everybody be going back to f—ing China,” the man on the bike yells towards a crowd of pedestrians crossing the street. A man then comes up behind his bike and punches him in the head, knocking him to the ground.

The assailant continues throwing punches while the man on the ground puts his hands up to cover his face.

Multiple pedestrians are seen continuing to walk past the man as he is being punched.

“This is terrible. The assailant just walks up to the man & starts beating the man. What is even more appalling is that witnesses didn’t help the victim or stop the perpetrator. #Hatecrime,” said another.

Many social media users drew attention to the assault victim’s race while congratulating the attacker for fighting back.

“Asians know that almost all of the “Asian hate” is coming from the black community. Apparently they are ready to fight back. This guy is obviously a racist. If you’re a racist talking shit, you just might get punched,” said someone else.

“So a racist a$$hole gets some street justice, love it,” said another.

New York City has seen a 139% increase in hate crimes this year, according to New York Police Department statistics. Hate crimes against Asian Americans and Pacific Islanders are up a whopping 400% during the same time period.