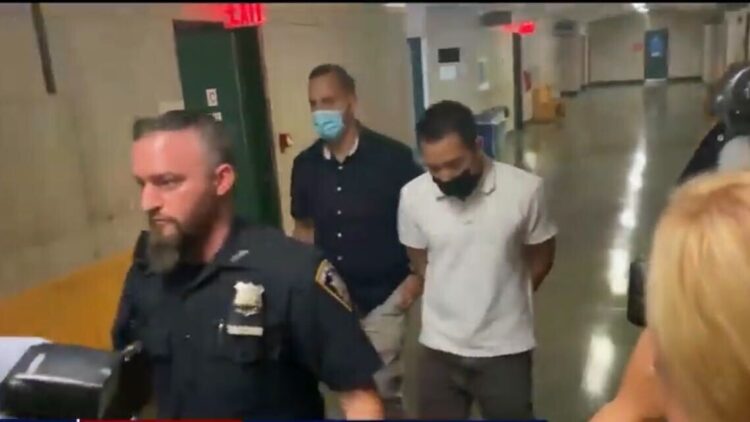 An NYPD officer faces criminal assault charges following an encounter with a man hurling anti-Asian slurs in his direction.

Sgt. Phillip Wong, 38, pleaded not guilty to two different assault charges from encounters in 2019 and 2020 with two different men. “As alleged, this Sergeant grossly violated his training — and the law — during the arrests of these two individuals, whose conduct did not justify these violent responses,” said Manhattan District Attorney Cyrus Vance, Jr.

Wong is accused of punching a 35-year-old man in the face in April 2020. The man allegedly punched another passenger at a NY subway station. According to the prosecution, two of Wong’s subordinate officers had the man in custody. As they were exiting the station, the man began hollering anti-Asian slurs and then kicked Wong.

Wong allegedly took the man down and began kneeling on his back while the man screamed, “I can’t breathe.”

“I don’t give a f— if you can breathe or not,” Wong responded, according to Vance, who said Wong then punched the man in the face.

After being transported to the hospital and examined, doctors determined the man sustained no injuries from the incident.

The other alleged incident occurred in October 2019. Wong was part of a small group of officers escorting a prisoner to a holding cell in Harlem. During the transfer, the 48-year-old prisoner allegedly kicked a cell door and spat on the officers.

According to the prosecution, Wong then punched the prisoner in the face, causing facial lacerations. The man was taken to the hospital and received stitches for a wound right above his eye.

“This is much more indicative of … the lack of respect for police officers citywide,” said defense lawyer Andrew Quinn, maintaining that Wong didn’t do anything criminal in his treatment of the two men in question.

“When they see the video (of the incidents), they’ll be as surprised as we are that this case went to criminal court. I thought that this case should have been handled administratively within the NYPD,” he continued.

“People say vile, terrible things to police officers all the time, and this is on a daily basis. I mean, a cop can’t step out of a car anymore in this city without somebody shouting either an ethnic or racial slur… at the officer.”

Wong was released on his own recognizance. DA Vance did not immediately respond to a request for comment.