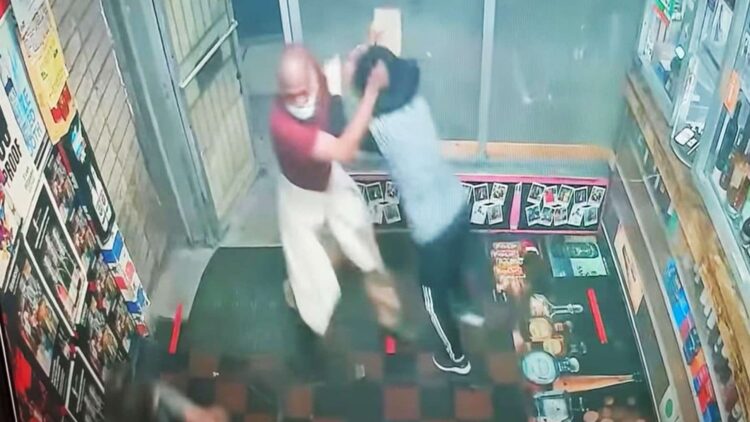 A man was arrested after two Asian women, ages 66 and 67, were repeatedly attacked with a cinder block at a Maryland liquor store.

Daryl Doles, 50, was charged with two counts of aggravated assault, police said. Officials investigating the incident did not specify whether it was being treated as a hate crime.

Surveillance video shows Doles forcing his way into the store, wielding a cinder block, pulling one of the women to the ground before striking her repeatedly in the head. A second man is seen during the attack but simply turns his back and walks out of the store. Authorities have not yet identified the witness who refused to help the two female victims.

Moments later, another woman from inside the store begins to help fight off the attacker. She, too, gets struck in the face multiple times before the attack is taken outside of the store. Authorities arrested Doles shortly after he took off from the store.

Both women were taken to the hospital and treated for non-life-threatening injuries. John Yun, who says he is the son of one of the victims and nephew to the other, says his aunt required 25 stitches in her head. Yun created a GoFundMe fundraising page where pictures of the victims’ faces are posted.

“We are relieved that both of their CT scans came back good and were discharged hours later,” Yun wrote.

“While we are still learning the facts, one thing is clear: Such shocking acts of violence against fellow members of our neighborhoods cannot go on,” Attorney Robert Hur, who is representing the victims, said. “The family is grateful for the outpouring of sympathy and support.”

“I urge everyone to do all we can to raise awareness and to speak out against bias, hate, and violence against any members of our city and community, including Asian Americans,” he added.

Maryland Governor Larry Hogan spoke out about the incident saying, “It’s just another example of these violent outbursts and attacks on Asians all across the country,” Hogan said. “It was pretty hard to watch the two elderly women being smashed in the head with a brick.”

The incident comes as an Asian woman was hit with a hammer while walking in New York City on Sunday. Surveillance video showed a black woman charging after two Asian victims with a hammer, striking them multiple times.

Another attack on two Asian women occurred in San Francisco on Tuesday. Both women needed to undergo surgery at Zuckerberg San Francisco General Hospital due to the severity of their stab wounds. Charges against the suspect are pending, and there is no confirmation yet whether he will face hate crime charges.