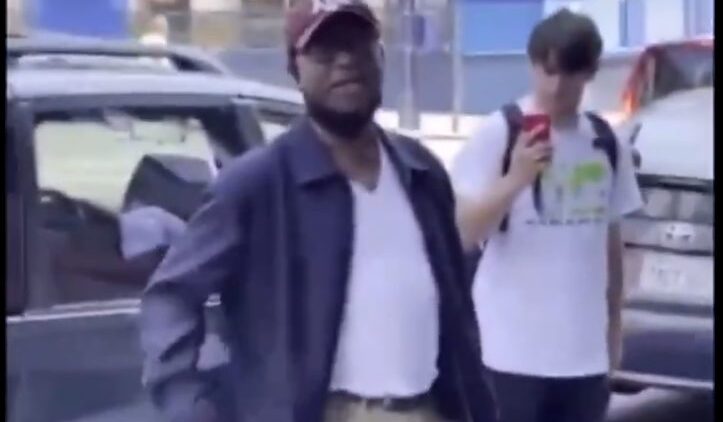 A black man was seen hurling racist and homophobic remarks at a gay couple on the streets of San Francisco.

“I served this goddamned country. So I’m m not racist. I don’t like you f–king Asian motherf—ers in my country!” the man yelled at the couple. One of the men is Asian.

The man can be heard on video saying, “I’m gonna whup your f— ass and his f— worthless ass.”

One of the victims shouted back, “You’re worthless.”

The man then yells, “No your mother was worthless because she didn’t abort your sorry ass.”

“I think San Francisco is better than this,” said witness Darren Mark Stallcup. “Things escalated pretty quickly. I’m pretty surprised no one got physically hurt, but there was a lot of crazy things that were said.”

The couple entered a hotel in an attempt to call the police.

“You can call 911 all you want, you mother f—er,” the man yelled as he followed them.

“You better back the f–k up, right about now,” the man yells, and he points to the couple and continues to walk towards them.

As the enraged man is walking away, one of the men says, “This gentleman right here, racist!”

The disturbing altercation occurred as the FBI released data showing hate crime rates are up across the country, especially in California.

“Hate crimes…have always been a topic of concern,” said FBI Sacramento Special Agent Sean Reagan. “The trends have shown an increase over the last five years.”