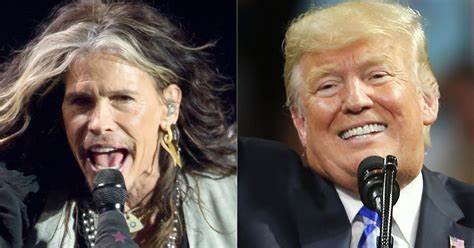 “On the way out the door, Trump says something about, ‘Rock stars have all the ladies,’ which apparently Perry got mad at, because he’s been married for decades and takes all that stuff pretty seriously,” said Donald McGahn, who was Trump’s general counsel at the time.

Perry, who has been married to Billie Paulette Montgomery for 30 years, took umbrage at Trump’s womanizing comment. The meeting between the rockstars and then-candidate Donald Trump was Perry’s idea, who reached out to Trump’s campaign manager Corey Lewandowski as they were already scheduled to play at the  2015 Pro Football Hall of Fame Enshrinement Festival in neighboring Canton, Ohio.

“So we sat there with Aerosmith about an hour before the debate, swapping stories of Aerosmith as opposed to doing debate prep,” Lewandowski said.

Since the meeting, Tyler has repeatedly warned Trump about blasting Aerosmith songs at his political rallies, issuing the campaign multiple cease-and-desist letters between 2015 and 2018.

The revelations of the ill-fated meeting comes as Trump insulted Senate Minority Leader Mitch McConnell (R-KY) as a “stupid person” for not terminating the filibuster while Republicans controlled Congress.

RELATED: Trump slams McConnell for not getting rid of the filibuster: ‘He’s a stupid person’

“He’s a stupid person,” Trump said of McConnell in a recent interview. “I don’t think he’s smart enough…I tried to convince Mitch McConnell to get rid of the filibuster, to terminate it so that we would get everything, and he was a knucklehead, and he didn’t do it.”

“And if they get the filler, he’s hanging on Joe Manchin, who always goes with the Democrats. Joe talks, but he ends up going with the Democrats,” Trump added. “If [Democrats] get rid of the filibuster, if they knock it out, it will be catastrophic for the Republican Party.”

“President Trump tried to get me to orchestrate the end of the filibuster for a number of years, even tweeted about it, and I said ‘no, Mr. President, that is not in the best interest of the institution…it’s actually not in your best interest either,” McConnell said. “They’re prepared to steamroll the Senate into a majoritarian body like the House because it inconveniently gets in the way of all they want to do.”