Trump slams McConnell for not getting rid of the filibuster: ‘He’s a stupid person’ 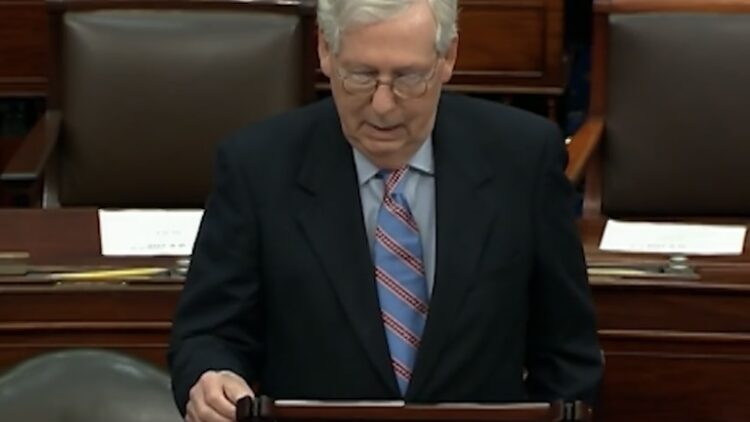 Former President Donald Trump blasted Senate Minority Leader Mitch McConnell for failing to terminate the filibuster while he was the majority leader.

“He’s a stupid person,” Trump said of McConnell in a recent interview. “I don’t think he’s smart enough…I tried to convince Mitch McConnell to get rid of the filibuster, to terminate it, so that we would get everything, and he was a knucklehead and he didn’t do it.”

In 2018, Trump urged Republicans to eliminate the filibuster before Democrats had a chance to, saying that then-Senate Minority Leader Chuck Schumer (D-NY) would get rid of it as soon as his party regained the majority in Congress. Several lawmakers at the time allege that Trump was told of Schumer’s legislative intentions by a mutual friend who had heard the New York Democrat discussing the filibuster at an event. Another GOP lawmaker who refused to identify themself said that Schumer had privately reassured Republicans that he was committed to keeping the filibuster. Although Schumer has not explicitly said he favors eliminating the filibuster, he has alluded to his intentions since Joe Biden took office.

“Our caucus will come together and decide the appropriate action to take. Failure is not an option,” Schumer said in March. “Everything is on the table.”

Back in late March, Trump warned that eliminating the filibuster would be ‘catastrophic’ for Republicans. Trump also lamented that McConnell was “hanging by a thread right now with respect to the filibuster.” Trump also predicted that Sen. Joe Manchin (D-WV) would waver on the filibuster despite his rhetoric.

“And if they get the filler, he’s hanging on Joe Manchin, who always goes with the Democrats. Joe talks, but he ends up going with the Democrats,” Trump said. “If [Democrats] get rid of the filibuster, if they knock it out, it will be catastrophic for the Republican Party.”

In an interview with Fox News, McConnell said Trump asked him to come up with a deal that would end the filibuster for the duration of his presidency. McConnell told Fox that he denied Trump’s request, saying it wouldn’t be in the party’s best interest.

“President Trump tried to get me to orchestrate the end of the filibuster for a number of years, even tweeted about it, and I said ‘no, Mr. President, that is not in the best interest of the institution…it’s actually not in your best interest either,” McConnell said. “They’re prepared to steamroll the Senate into a majoritarian body like the House because it inconveniently gets in the way of all they want to do.”

President Joe Biden has indicated that he would support abolishing the filibuster as it stands today, in favor of a ‘talking’ filibuster, in which the legislator must “command the floor” and “keep talking.”