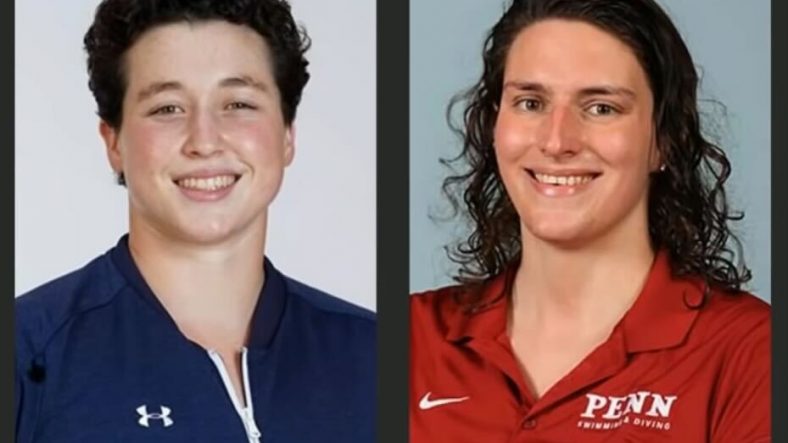 The world of women’s swimming has been rocked by the controversial presence of transgender competitors, and Saturday’s face off between two trans swimmers ended with Lia Thomas, trans female swimmer for UPenn, coming up short in her race against trans female swimmer Isaac Henig of Yale.

“Everything is messed up. I can’t wrap my head around this. The NCAA needs to do something about this. They need to put science into the decision and discussion,” said a UPenn swim parent.

The 20-year-old Henig of Palo Alto, California has begun transitioning, but has opted not to undergo hormone treatment yet so that he can continue to compete in women’s swimming. Henig did have his breasts removed as part of his transition.

“As a student athlete, coming out as a trans guy put me in a weird position. I could start hormones to align more with myself, or wait, transition socially, and keep competing on a women’s swim team. I decided on the latter,” Henig said.

“I value my contributions to the team and recognize that my boyhood doesn’t hinge on whether there’s more or less testosterone running through my veins. At least, that’s what I’ll try to remember when I put on the women’s swimsuit for the competition and am reminded of a self I no longer feel attached to,” he continued.

Lia Thomas, whom many consider to have an unfair advantage over swimmers born female, swam for the University of Pennsylvania men’s team for 2 seasons, Thomas decided to join the women’s team this season.

In a sport where the winner is often decided by tenths or even hundredths of a second, Thomas’s margins of victory this season are unprecedented. She set a program, meet, and pool record by a whopping 38 seconds in the 1650-yard freestyle in December. Thomas also set the record for the fastest 500m female freestyle time in the country. She now holds the record by over 14 seconds. Thomas’s 1650 time would have put her in the finals at the 2021 NCAA Championships. Her results this season in the 200, 500, and 1650 set new UPenn records as well as meet and pool records.

Several members of the UPenn women’s swim team considered boycotting the school’s final home meet of the season to protest Thomas’s participation. Fear of putting their own swimming careers in jeopardy, being labeled “transphobic,” and risking being banned from the Ivy League championships in February reportedly caused them to abandon the plan however.

“How convenient that they have now avoided this potential conflict that they’re now aware was going to take place,” a parent said of the situation.

“As a member of the NCAA, Penn is governed by the policies of the national governing body,” Penn Athletics said.

“Lia Thomas has met or exceeded all NCAA protocols over the past two years for a transgender male student-athlete to compete for a women’s team. She will continue to represent the Penn women’s swimming team in competition this season.”