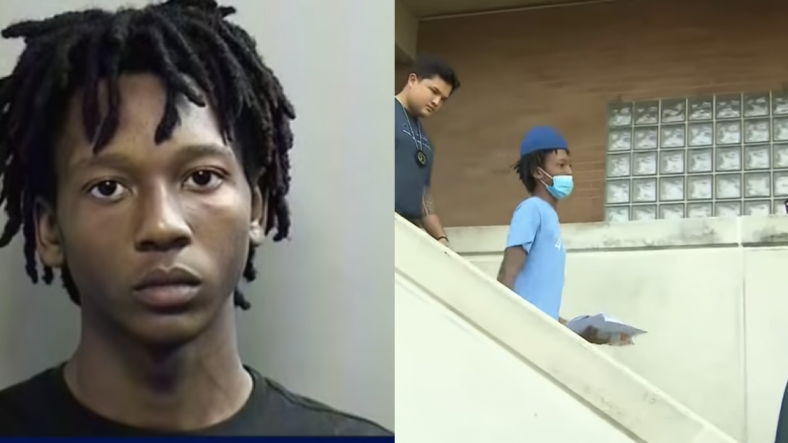 The Texas teen who made headlines after shooting up his school and then being released on bail the following day was re-arrested Thursday for violating the terms of his bond.

Timothy Simpkins, 18, has been put back behind bars after a court-ordered urinalysis came back positive for an “illicit substance.”

RELATED: GoFundMe for Arlington school shooter shut down: shooting people was ‘very traumatic’ for him

The “illicit substance” has not been publicly identified, but Simpkins was forbidden from any drugs or alcohol when he was released after opening fire at Timberview High School, critically wounding fellow student, Zaccaeus Selby, 15, and injuring two others as well.

Simpkins’ arrest Thursday comes barely a week after an official request made to his presiding judge to loosen the terms of his bond to allow him to go to church every Sunday, a request that had not yet been addressed by the judge at the time of Simpkins’ re-arrest.

On October 6 of this year, Simpkins was involved in a brawl with Selby before opening fire on his school. After the shooting, he eluded the police for hours. In a move that many found shocking, Simpkins was released on a $75,000 bond the day after the shooting occurred, and reportedly partied with relatives that evening while two of his victims remained hospitalized.

The Tarrant County Criminal District Attorney’s Office charged Simpkins with three counts of aggravated assault with a deadly weapon in November in connection with the October 6 shooting.

Family and friends of the shooter insist that Simpkins himself was a victim, and even started a GoFundMe page for him. The page paints Simpkins as a troubled teenager whose father was murdered and who was an innocent victim of bullying and harassment at school. His family has publicly stated that Simpkins was a victim of bullying due to the “nice things” he has, such as designer sneakers and a Dodge Charger.

Arlington Police Department Assistant Chief Kevin Kolbye said the bullying claims will be investigated. He also told the Mansfield Independent School District they needed to “reevaluate some of their safety measures.”

“I will tell you, that over the past few years, we have seen an increase in our youth, in Arlington and other cities too, carrying weapons,” he said. “And we just can’t stress enough that today, young people carrying weapons is just not a solution to any type of violence or anything like that.”