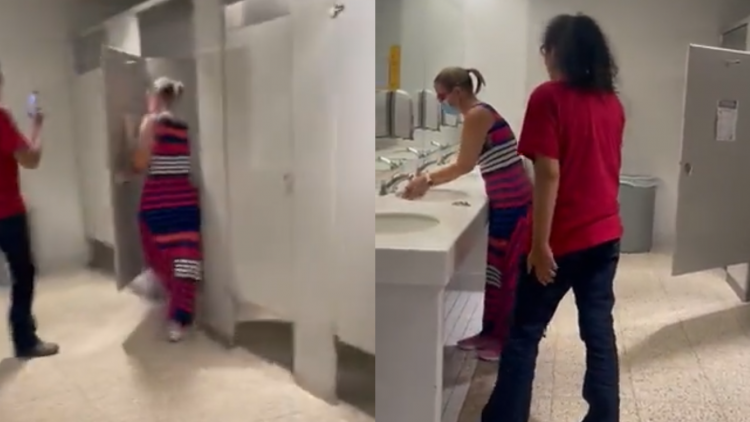 Senator Kyrsten Sinema (D-AZ) was followed into the bathroom at Arizona State University by activists demanding she keep her campaign promises on immigration reform.

“We knocked on doors for you to get you elected. Just how we got you elected, we can get you out of office if you don’t support what you promised us,” one person is heard saying on video footage of the incident.

No physical altercation is shown on the video, and Sen. Sinema did not engage in conversation with the activists, instead ignoring them for the duration of her bathroom visit.

“I was brought here to the United States when I was 3 years old and in 2010 my grandparents both got deported because of S.B. 1070,” another person advocated. “And I’m here because I definitely believe that we need a pathway to citizenship.”

The incident comes as Sinema has been thrown into the national spotlight, along with Senator Joe Manchin (D-WV), as the only two Democrats willing to oppose their party’s $3.5 trillion spending bill.

Reactions to the bathroom incident were varied on social media.

“Unaccountable elected officials do not have the privilege of privacy. Manchin and Sinema have routinely refused to meet their constituents; they have every right to get her attention. All she had to do was turn around and talk to them. What you see is her unbridled arrogance,” one person tweeted.

“They do, in fact, have the privilege of peeing in private,” Stephen L. Miller responded.

“Yesterday’s behavior was not a legitimate protest. It is unacceptable for activist organizations to instruct their members to jeopardize themselves by engaging in unlawful activities such as gaining entry to closed university buildings, disrupting learning environments, and filming students in a restroom,” she said in part.