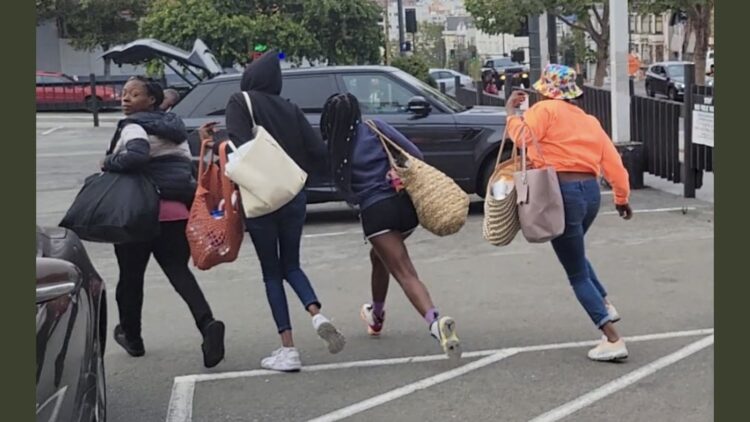 Four women were filmed running out of a San Francisco CVS Pharmacy with bags full of stolen merchandise on Monday amid a wave of shoplifting in the city.

“These 4 women ran off after going into [a CVS Pharmacy] at Van Ness & Jackson in SF and “picking the place dry,” witness says,” tweeted Henry K. Lee, a local media crime reporter.

The four women run out of the store in broad daylight with bags full of stolen goods. They run across a parking lot and disappear. Lee said when store workers were asked if they would call the police, they “shrugged.”

The Democrat-run city has seen a wave of brazen shoplifters ransacking local businesses after a law was passed that raised the threshold for a felony charge from $450 to $950. Now, criminals are stealing from stores right in front of security in some instances.

“This sort of thing is becoming so normal,” the witness told Lee.

Former San Diego Mayor Kevin Faulconer, running to replace Gov. Gavin Newsom in the upcoming recall election, blasted Newsom for supporting “the lessening of laws when it counts to stealing items under $950, lowering those consequences.” Faulconer made the comments outside of a shuttered Walgreens, which closed after being overwhelmed with shoplifters.

Newsom held a press conference last week where he said he signed a law that maintains “task forces” across the state to crack down on retail theft.

Earlier this month, a group of shoplifters was seen running out of a Neiman Marcus with dozens of expensive handbags.

“SFPD confirms this shoplifting incident at Neiman Marcus in Union Square at about 5:49 pm. A man I spoke w/tonite says his wife works in area, saw it happen & sent me this video which is circulating online. Handbags at Palo Alto NM were also stolen in a similar fashion in May,” tweeted local reporter Dion Lim.

Retail chain Target released a statement earlier this month citing the spike in shoplifting as their reasoning for cutting the hours of operation for six of their San Francisco stores.

“For more than a month, we’ve been experiencing a significant and alarming rise in theft and security incidents at our San Francisco stores, similar to reports from other retailers in the area. Target is engaging local law enforcement, elected officials, and community partners to address our concerns,” the retail chain said.

“With the safety of our guests, team members, and communities as our top priority, we’ve temporarily reduced our operating hours in six San Francisco stores.”