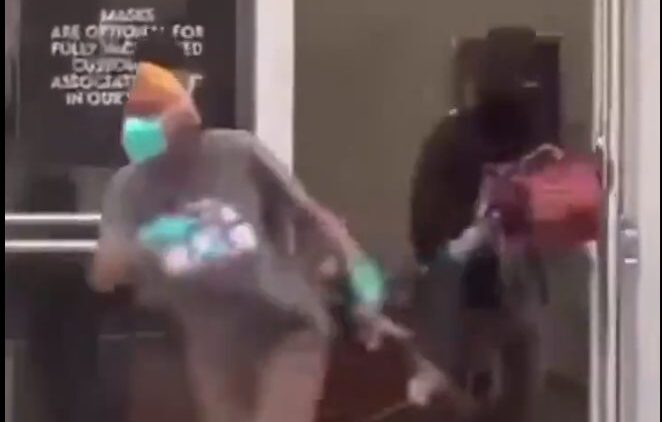 “SFPD confirms this shoplifting incident at Neiman Marcus in Union Square at about 5:49 pm,” tweeted San Francisco news reporter Dion Lim along with a video of the crime.

At least nine individuals dressed in hoodies, masks, and sweatpants are seen fleeing out the store’s doors, gripping handbags that were for sale inside. Bystanders watch and film the criminals flee as they got into getaway cars and speed down the busy street.

“A man I spoke w/tonite says his wife works in area, saw it happen & sent me this video which is circulating online. Handbags at Palo Alto NM were also stolen in a similar fashion in May,” Lim’s tweet continued.

“The man who took this video works nearby. He saw two suspects run in and immediately shut and locked the doors of the store he works at. He told me he then saw 8 more run in. He says this happened to his store in the past it’s ‘traumatizing’ to him & his colleagues,” Lim says.

“A woman who has shopped the handbag department at NM for a long time told me a sales associate had to hurry customers to the back– in order to keep them safe from the smashed glass from handbag display cases.”

The heist occurred shortly before the store was scheduled to close. According to witnesses, the suspects smashed display cases and other items inside. By the time officers arrived at the scene, the suspects had fled, according to local media.

The crime occurs as San Fransisco grapples with a spike in shoplifting and other crimes. Last week, Target announced they would be closing six of their San Francisco stores early to help deter shoplifters.

“For more than a month, we’ve been experiencing a significant and alarming rise in theft and security incidents at our San Francisco stores, similar to reports from other retailers in the area. Target is engaging local law enforcement, elected officials and community partners to address our concerns,” the retail chain said Friday.

“With the safety of our guests, team members, and communities as our top priority, we’ve temporarily reduced our operating hours in six San Francisco stores.”