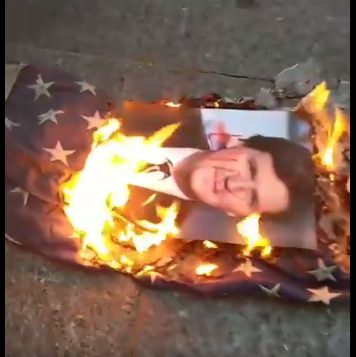 A group of protesters burned the American flag and a photo of Tucker Carlson outside the Fox News headquarters in New York City this week.

A video released on social media shows the group, most of whom were wearing face masks, throwing the photo of Carlson on an already burning flag as a few bystanders watch and record. “When they start burning your picture, you know your message is having an impact,” one Twitter user observed.

RELATED: Tucker Carlson confronted in viral video: ‘You are the worst human being known to mankind’

It appears that less than a dozen people were involved in the incident. Their group affiliation is unclear. “Get the barbeque started,” one of the protesters is heard saying as Carlson’s picture is thrown on the fire. One of the protesters can be seen flipping off a bystander during the demonstration.

Reactions to the video were largely negative.

“Whatever side these guys are on, put me on the other side,” said one user.

“What a bunch of losers,” said another.

“What are they protesting? Is Tucker spreading too much truth?” wondered a third.

RELATED: Tucker Carlson spars with Geraldo Rivera over border crisis: ‘Are you freakin’ kidding me’

“An Example of the tolerant Democratic Party view,” tweeted another.

Some Twitter users poked fun at the lack of participation and small scale of the protest.

“Looks like a large protest,” quipped one. “All eight of them,” agreed another.

“10 people , shaky cameras and a match,” said one person.

A few people cheered the protesters’ actions, however.

“Y’all stormed a capital. Calm down,” tweeted another.

This is not the first time Carlson, who hosts Tucker Carlson Tonight on Fox News, has been a target. In 2018, his home was vandalized by Antifa protesters who screamed, “Tucker Carlson, we will fight! We know where you sleep at night!”

About 20 people were part of the group. They used a bullhorn to verbally harass Carlson and his family, telling them they were “not safe.” They also painted an anarchy symbol on his driveway and left signs with political messages on his car and front door.

After the incident, Carlson described it as “chilling” and “upsetting.” The family ultimately moved due to the incident and continuing threats.

In July 2020, Carlson reported on his show that the New York Times was going to publish his home address, threatening to do the same to the reporter. Carlson alleged that the reporter was “working on a story about where my family and I live” because “They hate my politics. They want this show off the air,” and “to inflict pain on our family.”

Ultimately, Twitter users ended up doxxing the Times reporter. The Times released a statement saying they had never intended to publish Carlson’s home address. The Department of Homeland Security’s Ken Cuccinelli said that in his opinion, the New York Times reporter’s “intent” was to encourage violence against Carlson.

Tucker Carlson Tonight show did not immediately respond when contacted for comment on the incident.