Tucker Carlson confronted in viral video: ‘You are the worst human being known to mankind’ 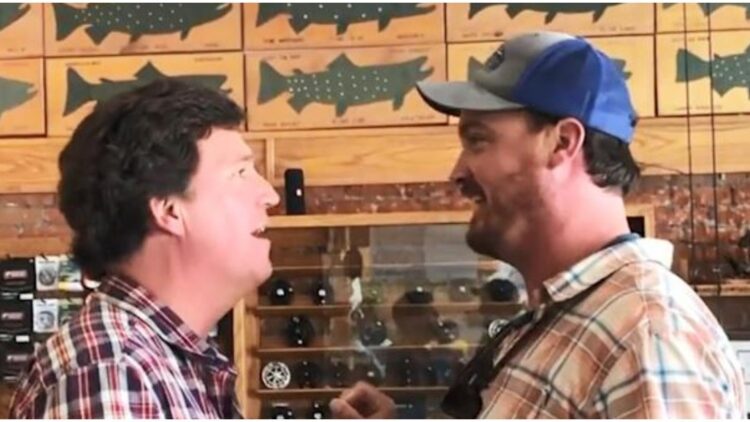 Fox News’ Tucker Carlson was confronted on Friday by an Instagram user named Dan Bailey, who posted a video of the exchange on his account.

“It’s not everyday [sic] you get to tell someone they are the worst person in the world and really mean it,” Bailey wrote in an Instagram caption. “What an a**hole! This man has killed more people with vaccine misinformation, he has supported extreme racism, he is a fascist and does more to rip this country apart than anyone that calls themselves an American.”

In his now-viral Instagram post, Bailey included hashtags like, “F**k Tucker Carlson,” “Stay out of Montana,” and “Trump lost.” He also tagged Democratic reporters’ accounts like Rachel Maddow and Molly Jong-Fast. Later on, Jong-Fast reposted Bailey’s video on her own Twitter feed.

“This man is a hero,” Jong-Fast said of Bailey, in a now-deleted Tweet.

“He should face this every day,” a user responded. “Every outing. Relentless. No peace for Tucker.”

When Bailey saw Carlson at a Montana-based fishing store, he approached him and began ranting at him. Carlson remained calm throughout, telling Bailey to stop, that his daughter was there and could hear them. Bailey kept going, though, calling Carlson “the worst.”

Carlson is then heard telling Bailey to “settle down, son,” in a low voice. Bailey then tells Carlson not to call him son, and Carlson walks away, effectively ending the conversation. The video has garnered thousands of views, and was trending on Twitter last night. Some conservatives online are outraged by Bailey’s behavior, while liberals have praised it.

“Is the loser who went out of his way to have someone video him harassing Tucker in public for some viral content the model for the new Pregnant Male Emoji?” Donald Trump Jr. tweeted. “The likeness is uncanny! #SoBrave.”

“This is a shocking video,” conservative filmmaker Dinesh D’Souza tweeted. “This man should be arrested for what he did to Tucker Carlson in front of his daughter.”

“Keep spreading this incredible video far and wide of Tucker Carlson being confronted by a brave patriot and told off in public,” an account called ‘ReallyAmerican.com’ – that has a link for Democratic PAC ActBlue in it’s bio – tweeted. “Not all heroes wear capes!”

“Sex is great but have you watched the guy tell of Tucker Carlson in the store,” Tony Posnanski tweeted.

Recently on his show, Carlson claimed that the National Security Agency (NSA) was spying on him. Late Friday night, the NSA confirmed his suspicions, saying he was “unmasked.” Carlson’s show, Tucker Carlson Tonight, will next air on Monday at 8 pm.