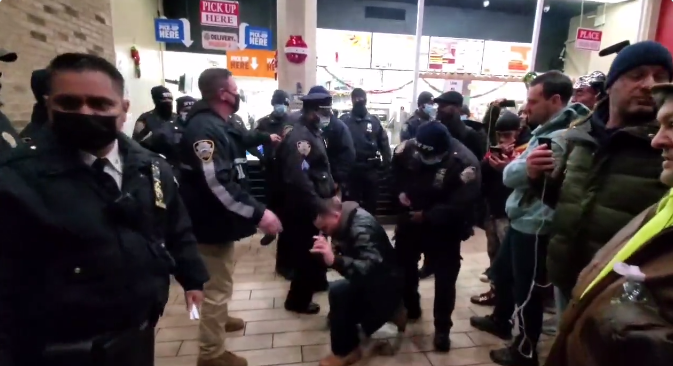 “#BREAKING multiple protesters against mandates were just arrested at Burger King in Brooklyn for defying the mandates. The NYPD Responded and told them if they don’t leave they will be charged with trespassing. They were taken out in cuff #VaccinePassports #VaccineMandate #NYC,” tweeted reporter Leeroy Johnson.

Protests broke out at Brooklyn’s Borough Hall, the office of Mayor-Elect Eric Adams, opposing outgoing Mayor Bill de Blasio’s vaccine mandate. The protesters were then denied service at the popular fast-food chain for choosing not to show proof of vaccination upon entry.

“The NYPD enforcing DeBlasio’s illegal mandate after he spent his entire administration attacking the NYPD, villifying them, and making their job impossible. Pathetic really. Refuse to enforce it. Stand up,” said Gavin Mario Wax in a response that currently has over 1,300 likes.

The uproar over vaccine mandates comes as New York continues to experience a crime wave, with many people feeling the focus and resources of law enforcement should be directed towards stemming the growing numbers of violent crime, including felonious assault and robberies, both of which have risen dramatically in recent months.

“These criminals are so damn scary, they went to Burger King in Brooklyn without vax passports. Forget that the crime in NYC is up by 81%, send all law enforcement to arrest these dangerously healthy people,” someone tweeted.

“There’s a crime wave in New York City… so it makes perfect sense to send a dozen cops to the arrest a man for not showing a vaccine card in Burger King,” tweeted Tim Young.

“I think New York should be more concerned with their CRIMEWAVE, than with arresting a man for not showing a vaccine card in Burger King,” said Lavern Spicer.

Many people also expressed frustration with the protesters.

“Burger King will allow take out. Just not dine-in per the mandate. Plus, antivaxxers lecture against fast food all the time, yet here they are,” one person tweeted.

“So nice of them to harass a bunch of Burger King employees who have no control over a mask mandate,” observed another.

This protest comes as President Biden said during a press conference Monday that there is no federal solution to Covid-19, despite promising during his campaign to end Covid-19, and instituting federal mandates related to the pandemic during his presidency thus far.

“Look, there is no federal solution. This gets solved at a state level,” the President said Monday, just before meeting with some of the nation’s governors.

The CDC also recently announced that it is lowering the quarantine recommendation for persons exposed to Covid from 14 days to 10 days. “I rely on my medical team,” Biden said of the CDC’s announcement. “I get a recommendation, I follow it.”