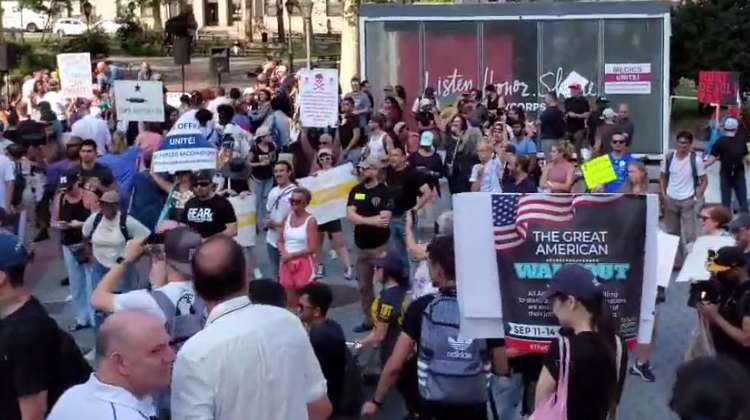 Protestors against New York City’s vaccine passport program called “Key to NYC,” which went into effect Monday, marched through the city demanding an end to the policy that many say is discriminatory.

“100s of protesters who are against the mandatory shot take to the streets of NYC. Today NYC mandated business to enforce the shot passport,” tweeted Leeroy Johnson along with a video of the protest.

“About 1000 protesters against the mandatory shot gather at Foley Square in NYC the day when the shot mandate comes in to effect in NYC. they chant ‘F×ck the vax,'” a second video of the protest shows.

“#happeningnow on the Brooklyn Bridge in NYC , protesters against the mandatory shot chant ‘F@CK JOE BIDEN,'” Johnson tweeted along with a separate video of the protest.

Protestors chanted “my body my choice” as they marched into the evening on Monday.

Since August 17, the city has required that anyone aged 12 or older show proof that they have had at least one COVID-19 vaccine for indoor dining, gyms, entertainment venues, museums, and sports arenas. Today the city began enforcing those rules with their vaccine passport program called “Key to NYC.”

Inspectors from 13 different city agencies will begin going door to door, ensuring that Mayor Bill de Blasio’s mandate is followed. Businesses that do not comply will be subject to fines. Inspectors will check if the business has proper signage and that employees are properly checking each customer for proof of vaccination, de Blasio said.