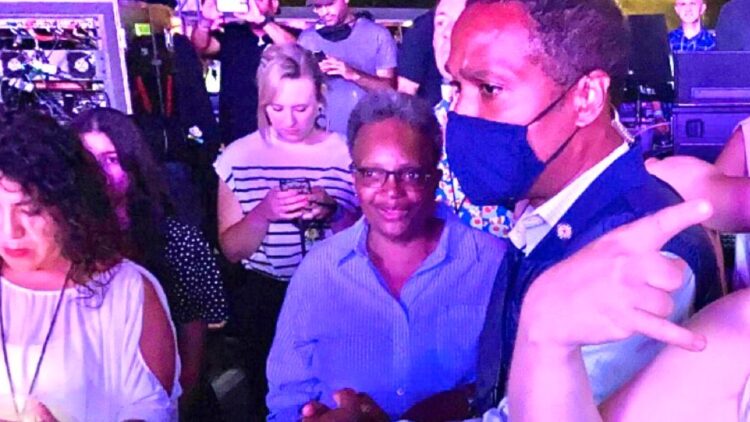 Chicago Mayor Lori Lightfoot (D) is receiving backlash for holding Lollapalooza and partying maskless at the festival while announcing a return of harsher Covid restrictions.

“Lori Lightfoot doing her hypocrite thang at LOLLAPALOOZA! #Maskless,” said James Woods, who posted a photo of Lightfoot at the festival without a mask.

“Will @chicagosmayor Lightfoot be blamed for approving a #COVID19 super-spreader event this weekend — @lollapalooza , three days of music euphoria with a huge, mask-less crowd?” wondered Laurie Garrett, Pulitzer Prize winning journalist who published a scientific series on the Ebola virus outbreak in Zaire.

Lightfoot publicly dismissed the concern of a health expert last week before the start of Lollapalooza, an annual outdoor festival that sees about 100,000 people each of the 4 days of the festival.

Dr. Emily Landon, an epidemiologist at the University of Chicago, said that she believes holding the festival is a bad decision, saying it’s too crowded to be safe, especially given the highly contagious Delta variant contributing to the rising number of positive cases in the Chicago area.

“The Lolla team has been phenomenal. They’ve hired their own public health experts who’ve been working hand-in-glove with us since we started these discussions back early in the spring. … So, God bless the critics standing on the sidelines. But I feel confident that the Lolla folks have a good solid plan in place. And we’re gonna obviously hold them accountable to make sure that plan is enforced,” Lightfoot said in a press conference.

RELATED: Days away from Lollapalooza, Lori Lightfoot not concerned with doctor’s COVID warning

“Another “Rules for Thee” offender. Why so many hypocritical moments? Guess Chicago will be heading into a lockdown this week?” one person tweeted.

“Everyone knows covid takes a vacation during lollapalooza,” observed another.

Many expressed their belief that current Covid restrictions and the reinstating of mask mandates are more about politics than science.

“Further proof that Covid goes where the Dems say it should go,” said one person.

“Because the Delta variant, you know,” Tweeted another.

“…Another Democrat Mayor Following THEIR OWN SCIENCE…?” observed someone on Twitter.

“Makes me absolutely sick to my stomach to watch these tyrants order the peasants to follow their rules or else and then flaunt their own rule breaking shamelessly… I can’t believe people are still obeying at this point,” one Twitter user said.

“The elite masks you but not themselves. Think,” another Twitter user urged.

Still others expressed the belief that Lightfoot’s political career is in jeopardy and Chicago citizens should consider whether she deserves to be reelected.

“And people vote for her,” one person Tweeted.

“I’m thinking Lolla might be the straw that breaks Mayor Lightfoot,” said another.

“I hope Lori Lightfoot gets voted out in the next election. Unfortunately, Chicago residents don’t have sense [sic] to elect better candidates,” Tweeted another person.