Man goes on anti-Asian tirade, growls like a dog on American Airlines flight 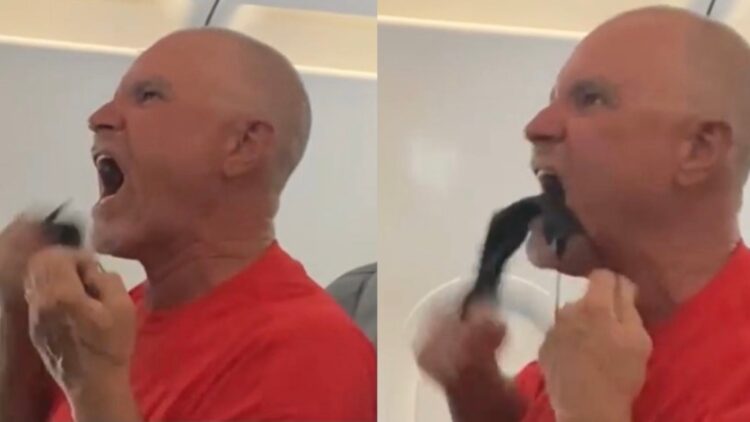 A Las Vegas man has been cited for public intoxication and disorderly conduct after going on an anti-Asian tirade, growling like a dog, and berating the flight crew on an American Airlines flight from Los Angeles To Salt Lake City on Monday.

“He began by yelling at the Asian woman in front of me to sit down when she was standing to deal with a back issue,” fellow passenger Dennis Busch said. The man told multiple flight attendants that the Asian woman and her partner “didn’t belong here.”

After a flight attendant asked the man to calm down and go to his seat, he completely melted down, hurling racist comments, profanities, and other belligerent comments. He was promptly arrested at the gate.

The man shot the middle finger at flight attendants and yelled “God Bless America” and “Joe Biden,” according to video of the incident captured by Busch.

“Huge thanks to the impressive and professional American Airlines crew who had to deal with this guy on a flight from LAX to Salt Lake City International Airport (SLC).” Busch’s post reads.

“We were lucky to have such a well-trained crew who kept their cool throughout the flight!” Busch added.

American Airlines confirmed the incident in a statement thanking their crew for their “professionalism and our customers for their understanding.”

RELATED: Girl accuses Alaska Airlines flight attendant of ‘slut shaming’ after asking that she zip up her sweatshirt

This year alone, unruly airline passengers have amassed a record $1 million in fines, with airlines reporting nearly 4,000 incidents as of mid-August. A majority of the incidents involved the refusal to wear masks and involved intoxication, according to the Federal Aviation Administration.