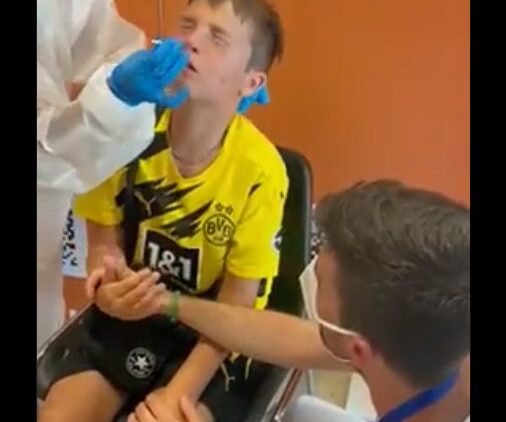 Ryanair has issued an apology after forcing a medically exempt 12-year-old boy with autism to take a COVID test.

“They said if you don’t have a Covid test you can’t go home, so we had no choice,” said Katy Hollingsworth, Callum’s mom, who is from Harlow in Essex.

Katy said Callum was “petrified.” She showed his medical exemption letter, signed by a doctor and UK Government guidance, to the staff, but the family was told they could not board their flight home until Callum was tested.

“Listen to me, you need to [big exhale],” a staff member told the visibly frightened and agitated little boy. The child cries and fidgets as several staff members surround him.

Callum’s dad filmed the incident. Callum can be seen in the video, adamantly indicating they are not to swab his left nostril. At one point, shaking his head, “no,” he buries his face in his hands.

“You have to be still, ok, otherwise it will take longer,” one of them informs him.

“The staff were just ignoring us. All they kept saying was ‘it’s not our problem,’” Katy added, saying that they even called the police in to assist during the incident.

Twitter users responded with outrage to the viral video.

“Words fail me to describe how angry this makes me. The family should sue immediately,” said one Twitter user.

“Make sure you take this to the highest point of authority that you can. That is nothing short of child abuse!!!!!! I’m livid!” tweeted someone else.

“I’m horrified to see this, my heart goes out to Callum. My #autistic son would have been in pieces if forced to endure this especially by people dressed like that. What an unacceptable ordeal,” another mother commiserated.

Some Twitter users were also angry that the parents didn’t intervene.

“Disgusting from both the airline and the parents..Welcome to the new normal,” one person observed.

“So why didn’t his parents step in ?,” wondered someone else.

We got an official exemption in writing for our son. Someone would have lost an eye if they’d tried that on him,” another parent wrote.

Ryanair apologized for the incident, saying they regret the stress it caused.

“Apologised? They should be charged with physically assaulting a child and prosecuted accordingly,” one Twitter user wrote.

“Ryanair fully complies with EU and government travel restrictions, which are constantly changing in the midst of the Covid-19 pandemic,” the airline said in a statement. “We continue to make improvements and implement procedures to ensure the health and safety of our passengers and our crew is prioritised while complying with each country’s government guidelines at all times.”

Callum has attention deficit hyperactivity disorder (ADHD) in addition to autism. His parents said the Covid lockdowns have been hard for him, so they took him on a vacation to his “happy place” in Spain.

Katy maintains that if Callum’s disability were more visually obvious, he would not have been discriminated against.

“If my child was in a wheelchair or had something you can see, I don’t think they would have treated him the way that they did,” she said.