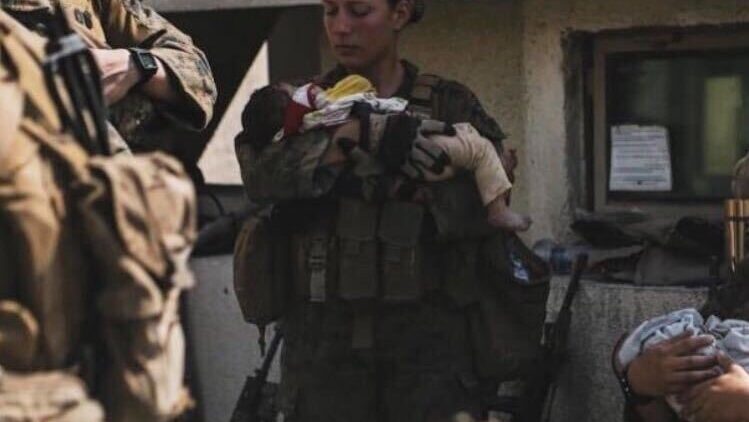 One of Sgt. Nicole Gee’s last social media posts before she was killed was an Instagram photo of her cradling a rescued infant in Afghanistan, with the caption “I love my job.”

The 23-year-old, killed this week in the suicide bombing at the Kabul airport, was widely regarded as a “model Marine.”

Gee was from Roseville, California. She served as a maintenance technician with the 24th Marine Expeditionary Unit, and was famous among her unit for having a perfect fitness score.

“I had to sit with this photo for a bit. What a brave, compassionate young woman. God rest her soul and wrap His arms around her family. May there be justice dealt to those who deserve it, both domestic and foreign,” tweeted someone.

“I went misty eyed from the heartwarming pics of soldiers helping kids to sobbing seeing pictures of the soldiers we lost (some the very same ppl). Wish I could express my gratitude for their service and ultimate sacrifice,” tweeted someone else.

In another recent Instagram post, Gee is pictured standing guard near a plane during boarding of evacuees. “Escorting evacuees onto the bird,” she captioned the photo.

RELATED: New York Times reporter tears into Psaki for claiming there were only two options in Afghanistan

Other Instagram posts show Gee’s promotion to Sergeant and her spending time with her “valentine.”

Over 170 people were killed and hundreds more wounded in the suicide bombing at Kabul airport on Thursday. Gee was among 13 U.S. service members who died in the attack. The Pentagon is not officially releasing names of those killed by ISIS-K, the terrorist group that claimed responsibility for the attack amid the U.S.’s withdrawal from Afghanistan.

Following the attack, President Biden pledged revenge against ISIS-K. “We will hunt you down and make you pay,” he said during a press conference.

RELATED: Gay men stranded in Afghanistan fear for their lives, say Taliban will ‘enjoy’ beheading and stoning them