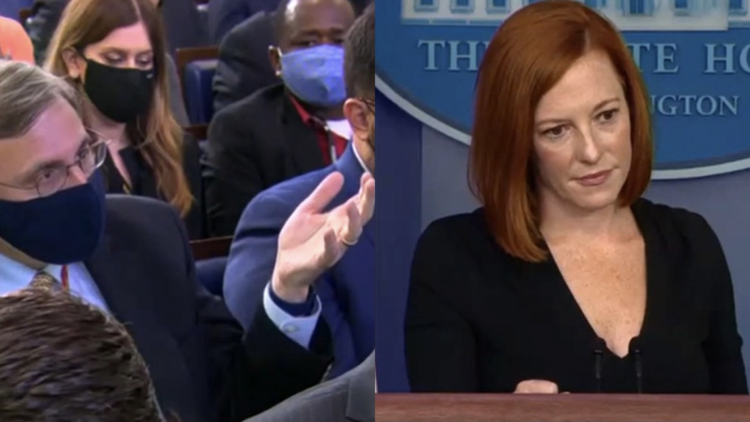 New York Times reporter Michael Shear got into a tense exchange with White House Press Secretary Jen Psaki after she insisted there were only two options that President Joe Biden had regarding his botched Afghanistan withdrawal.

The exchange between Shear and Psaki began after Sean Sullivan asked the secretary about criticisms from Democratic members of Congress on Biden’s handling of Afghanistan.

RELATED: Gay men stranded in Afghanistan fear for their lives, say Taliban will ‘enjoy’ beheading and stoning them

“I know earlier you addressed some of the Republican criticism of the President, but what is your message? What is the White House’s message to Democrats who have expressed substantive concerns about the withdrawal from Afghanistan?” Sullivan asked.

Psaki then asked for specific criticisms that he is referring to. Sullivan then gave a quote from Democratic Congresswoman Susan Wild (PA), saying, “It’s clear to me say that we could not continue to put American service members in danger for an unwinnable war, but I also believe that the evacuation process appears to have been egregiously mishandled.”

“So what’s your response to something like that?” Sullivan asked.

RELATED: Biden collapses head at podium after one question from Peter Doocy

“Look, I don’t have any direct response to any member of Congress,” Psaki responded. She then claimed that there were only two options for the withdrawal, a binary choice that Michael Shear wasn’t buying.

“But what I will say is that it is easy to throw stones or be a critic from the outside. It is harder to be in the arena and make difficult decisions,” Psaki said. “And the decisions that a commander-in-chief has to make include among difficult options, right?” She added.

“These were the options. You send tens of thousands of more troops in Afghanistan to potentially lose their lives; that’s an option. Some have called – some support that. That’s their prerogative,” she added. You pull out and you don’t put anyone at risk, you don’t put troops at risk, and you don’t evacuate more than 105,000 people, that’s another option,” Psaki continued.

That’s when Shear jumped in and pushed Psaki on her argument.

“Jen, apologies to my colleagues, but like, you guys have said repeatedly – presented this idea that there were only two choices. What evidence do you have that there weren’t other choices that could have been made?” Shear asked.

Psaki quickly shot back, saying, “What was – well, what’s the other choice anyone is offering?”

Shear then gave his argument as to how other options could have delivered a different outcome.

“Well, for example, the President could have said to the Ghani government in May, that we’re gonna start a mass evacuation of all of the U.S. personnel, we’re gonna put out an announcement that says, you know, ‘We advise all of our Afghan allies who worked with us to start evacuating as well.’ And I’m sure there are ten other options that I haven’t thought of that – so why do you present it as these being the only two options?” Shear said.

“There are, of course, other options, but there are consequences to every option. That is my point,” Psaki shot back.

She then gave her idea of what would have happened if Shear’s option was put into action.

“What would have happened in all likelihood, the threat on U.S. forces would have increased at that point in time.”

Shear fact-checked Psaki in real-time, saying, “But you would have been operating in a capital that wasn’t overrun by the Taliban at that point.”

Psaki quickly pushed back, asking, “How do you know that?”

Shear appearing to be confused by her question, quickly answered, saying, “The Taliban wasn’t near Kabul at that point” in May.

Psaki, realizing this wasn’t an argument she was going to win, quickly dismissed the question altogether by saying, “Look, Mike, I think it’s easy to play backseat, let’s look at what could have happened three, four months ago.”