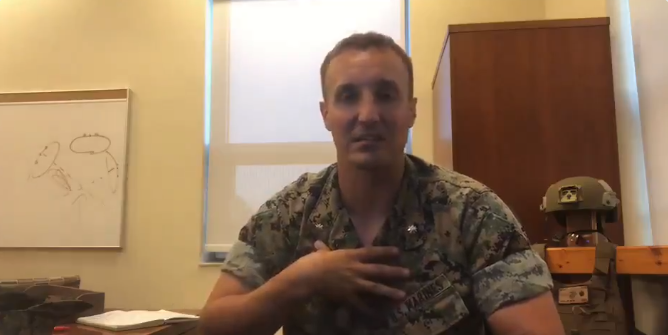 A Marine Corps battalion commander issued a call to action after being relieved of duty for publicly demanding accountability from senior military leadership for the botched Afghanistan withdrawal in a video that went viral this week.

“If you all agree…then step up. They only have the power because we allow it. What if we all demanded accountability?” the former commander, Stuart Scheller, wrote in a Facebook post.

“Every generation needs a revolution,” he continued, quoting Thomas Jefferson.

Scheller asks some straightforward questions in his viral video and he minces no words regarding his opinions on how the withdrawal from Afghanistan has been handled. “People are upset because their senior leaders let them down, and none of them are raising their hands and accepting accountability or saying, ‘We messed this up,’” he said.

“Did any of you throw your rank on the table and say, ‘Hey, it’s a bad idea to evacuate Bagram Airfield, a strategic airbase, before we evacuate everyone’? Did anyone do that? And when you didn’t think to do that, did anyone raise their hand and say, ‘We completely messed this up?’”

Scheller says he is not the only one upset with the leadership’s decisions. “I’ve got battalion commander friends right now that are posting similar things, and they’re saying, you know, wondering if all the lives were lost and if it was in vain, all those people that we’ve lost over the last twenty years,” he said.

“I have been fighting for 17 years,” Scheller stated. “I am willing to throw it all away to say to my senior leaders: I demand accountability.”

Military leaders were quick to react to Scheller’s message, and chose to relieve him of his duties Friday for a “lack of trust and confidence.”

Scheller’s message was met with extensive online reactions, most of which were supportive.

“The woke generals can troll Tucker Carlson on twitter and pontificate about “white rage” in front of Congress, but simply asking for accountability for their deadly mistakes…gets you fired. What a disgrace,” tweeted Donald Trump, Jr.

“Stuart Scheller would make a better Secretary of Defense than Lloyd Austin. We hear you. Accountability must come,” said Congressman Matt Gaetz.

“This guy is all class. He knew what the consequences would be. His concerns are not wrong. Many people feeling the same lack of accountability. When the dust settles that accountability must happen,” Congressman Dan Crenshaw tweeted.

“America has many issues…but it’s my home…it’s where my three sons will become men. America is still the light shining in a fog of chaos,” Scheller concluded on Facebook. “My life’s purpose is to make America the most lethal and effective foreign diplomacy instrument. While my days of hand to hand violence may be ending…I see a new light on the horizon.”