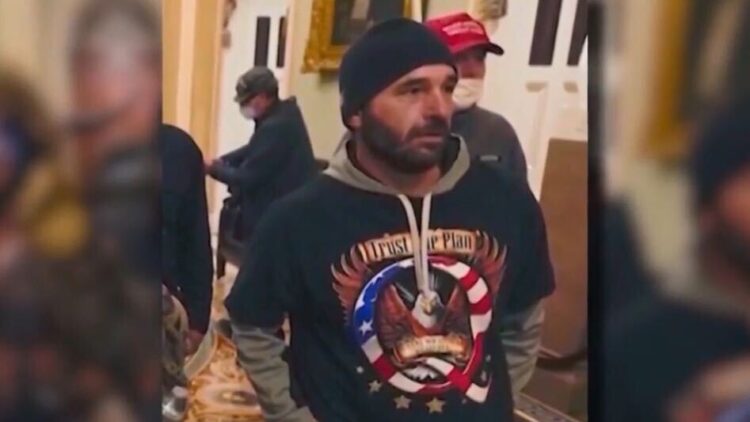 Accused Capitol rioter Douglas Jensen, released on the terms that he not use devices to access the internet, was caught in his garage watching the election fraud symposium led by My Pillow CEO, Mike Lindell.

“A mere thirty days after his release from the D.C. Jail,” said the court filing, “defendant Douglas Jensen was found alone, in his garage, using a WiFi-connected iPhone to stream news from Rumble.”

Iowan Douglas Jensen is accused of leading a mob that pursued and heckled a Capitol police officer on January 6. He was released into the custody of his wife on several conditions, which include remaining at home under GPS monitoring except for court hearings or doctor appointments and not accessing the internet for any reason.

The prosecution argued that Jensen is at-risk for subscribing to conspiracy theories online because he was wearing a Q-Anon shirt on January 6, which allegedly led him to participate in the events of that day.

The judge also required that all internet-capable devices in the home be password protected to further deter him from attempting to get online. However, it did not deter him, and less than a month after his release, he was caught red-handed using his cell phone to access the internet.

“Jensen eventually admitted to his Pretrial Services Officer that in the previous week, he had spent two days watching Mike Lindell’s Cyber Symposium regarding the recount of the presidential election,” the court filing said after Jensen was caught during a check-up.

“He has proven that not even six months in jail will deter him from returning to the conspiracy theories that led him to commit an assault against a federal officer on January 6, 2021,” said the filing.

Jensen’s attorney has continually argued that he “became a victim of numerous conspiracy theories.” He maintains that the Q-Anon conspiracy theory was “being fed to him over the internet by a number of very clever people, who were uniquely equipped with slight, if any, moral or social consciousness.”

“Jensen’s initial attraction to QANON was its stated mission to eliminate pedophiles from society. A fiercely protective family man, this was a powerful theme for him to latch onto,” the attorney continued.

Jensen disavowed Q-Anon in the courtroom, unlike many other January 6 defendants, and that may have factored into the judge’s decision to relegate him to home incarceration.

“Nothing I say should be understood to say that I don’t think Mr. Jensen’s conduct that day was very serious, that I don’t think what happened on Jan. 6 was very serious. And that shouldn’t give anyone a hint of what sentence I might think appropriate (should Jensen be convicted),” Judge Kelly said. “I’ve said many times, I do consider what happened that day to be the equivalent of trying to steal one of the crown jewels of our country, the peaceful transfer of power.”

The government is asking that he be sent back to jail while he awaits trial.