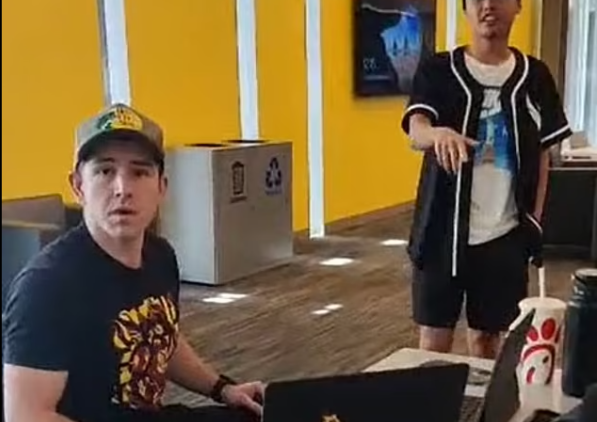 The activist students told the white students they needed to leave. “You’re making this space uncomfortable,” one student activist stated, after approaching the table where the two young men sat. “You’re white! Do you understand what a multicultural space is? It means you’re not being centered.”

“This white man thinks he can take up our space,” one of the activists explained for the camera. Visible on camera is an uncrowded, spacious area with an abundance of open desks, chairs, and couches.

“This is the violence that ASU does,” she continued. “This is the type of people they protect.”

The two white students declined to leave the space. “You’re racist, your sticker’s racist,” claims one of the activists.  “You can choose to kill people with a badge, and you’re protecting that sh*t, which means that you’re racist.”

“I’m sorry, I wasn’t trying to offend you guys,” the student offers.

“I know, but this offends us automatically because these people kill people like me and like us, right, so you’re promoting our murders.”

“We’re just trying to do school,” one student said. “I’m working 60 hours a week and going to school because my parents don’t just give me money!”

“This is the only place on campus that does not center you, and you are still trying to center yourself which is peak white cis male bulls**t,” one of the activists is heard saying.

At one point during the confrontation, an Asian student sitting nearby gets up to defend the two students studying. A couple of other students are seen approaching and videoing the encounter, but no one else chimes in during the incident.

RELATED: Biden in 1994: ‘Wouldn’t matter’ if ‘Haiti just quietly sunk into the Caribbean’

The University released a statement Friday on the incident.

“The Dean of Students Office is aware of the disagreement between a handful of students that was captured in a video circulated on social media. The Dean of Students Office will be discussing it with all involved. ASU is a community of more than 100,000 people from all 50 states and more than 150 countries. Differences of opinion are part of the university experience. The university expects respectful dialogue between students in all engagements,” wrote Jerry Gonzalez, Sr. Media Relations Officer.

Supporters of the two students who were accosted started a GoFundMe to help fund their tuition, but it was quickly removed by GoFundMe for a “violation of the terms of service.”

Arizona State University did not immediately respond to Independent Chronicle’s request for comment.