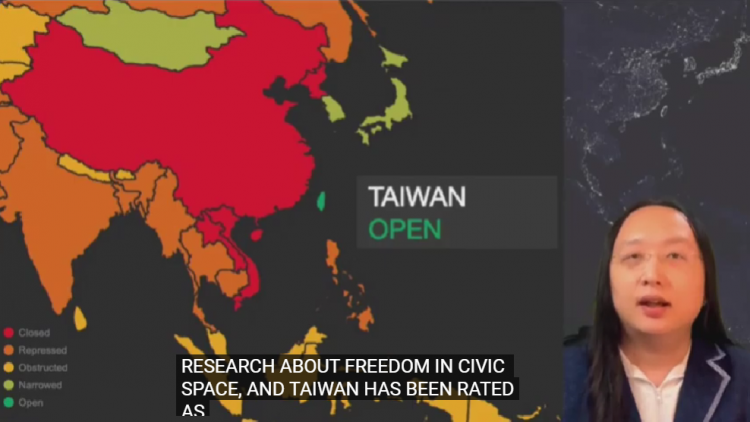 During President Biden’s Summit for Democracy, Taiwanese minister Audrey Tang was reportedly censored by the Biden administration when they cut off her video feed after she showed a map identifying Taiwan as separate from China.

Afterwards, the State Department said the incident was “an honest mistake” caused by technical “confusion” with the screen share.

Taiwan was colored green in Tang’s map, indicating the highest score on openness to civil rights. China, Laos, Vietnam and North Korea were colored red to represent the opposite side of the spectrum.

The map, from South African NGO CIVICUS, showed Taiwan as being the highest ranked in openness to civil rights. Other countries in the region were marked as “closed,” “repressed,” “obstructed,” or “narrowed.”

When the online moderator returned to Tang after the delay, the video feed was absent. On the blank screen, there was a disclaimer reading, “Any opinions expressed by individuals on this panel are those of the individual, and do not necessarily reflect the views of the United States government.”

Unnamed sources told Reuters that Tang’s video feed was cut by order of the White House.

“It was clearly policy concerns,” a different source told Reuters. “This was completely an internal overreaction.”

Taiwan responded to the incident, saying they were angry that Tang’s video was censored, though Tang herself said she did not think her video was cut due to political motivations.

“At no time did the White House direct that Minister Tang’s video feed be cut,” An NSC spokesman stated.

“The U.S. would likely want to avoid appearing to endorse that Taiwan is not part of China,” said Bonnie Glaser of the German Marshall Fund of the United States.

“It seems to me that a decision was made at the outset that Taiwan could/should be included in the Summit for Democracy, but only in ways consistent with U.S. policy,” she concluded.

Several Taiwanese foreign policy experts opined that the map distinguishing Taiwan from China did not appear to be in conflict with unofficial U.S. guidelines, which do not allow the use of overt symbols of sovereignty, such as the Taiwanese flag.